We went to the pistol range today, to keep proficient with our sidearms. It's always great to get out and "bus' a-cuppa-caps" so to speak! 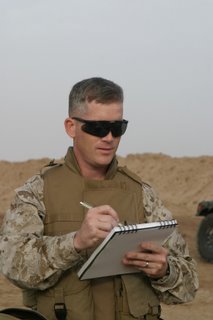 What a day. . . I was over at Fallujah Surgical today, sketching the place, when they brought in a 19 year old PFC. I went to the check-in hut and asked if I could go in and sketch. They gave me permission, and I went into the treatment room. I couldn't take my camera in, but the doctors said they didn't mind if I drew, and I said I didn't have to show details of faces, etc. I spent an hour or so drawing the activities surrounding the treatment of the young Marine-- from assessment, to surgery preparation, to surgery. The drawings shown here, though rough and simple, were done in real time, as the events unfolded. 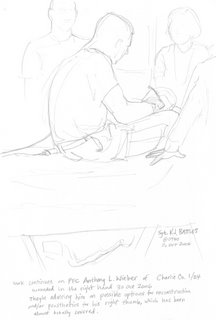 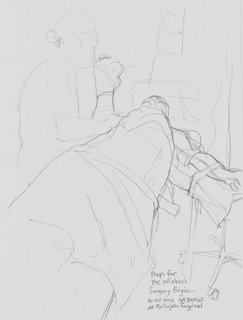 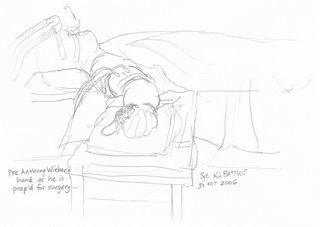 The Marine is from my old reserve regiment from my prior enlistment, the 24th Marines. He was wounded in the right hand, the thumb of which was almost completely severed. Luckily, he was wearing his body armor, as the chest plate stopped the other round which would have severely wounded or killed him. They talked to him as they assessed his wounds, and they showed him pictures of possible reconstruction they could do, or if necessary, prosthetics. He was alert and seemed to be taking it well. The docs took him into the OR and prepped him for surgery. They worked to save his thumb, and last I heard, he had been medevac'd for further surgery. 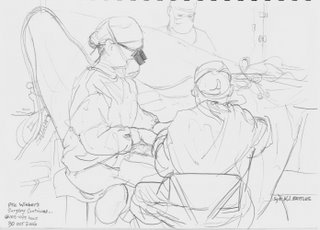 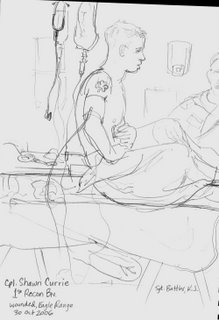 I hope they can save his thumb. When I went back in to Fallujah Surgical this afternoon to inquire about the Marine, there were several more Marines getting treated for minor wounds suffered. One was burned slightly on the face and had scratches on parts of his face and arms. I was able to get the sketch done shown here. What a nice batch of kids we are producing in America these days. My generation, as every one before, has talked of the degeneration of our culture -- "Kids today...!" I'm sure we are producing a lot of duds, even some in our military. But by far the vast majority I've seen have acted in that quiet, simple heroism that touches you when you see it. Humans may be sin-scarred and imperfect, but God has allowed for His nature to be seen, ever so slightly, sometimes even through the trauma and roughness of our world -- even in war.
Posted by Kristopher Battles at 10/30/2006 12:38:00 PM 14 comments:

Thanks to everyone for their comments lately, and thanks to Warrant Officer Mike Fay, who as you know is my "Dad" in the Combat Art Program (See his nice post today at Fire and Ice).

I've been getting my "sand legs" as he puts it, here in lovely Camp Fallujah, and soon will be getting out-- "outside the wire" so to speak--to spend time with various units fighting here in Iraq.

I also hope to get out and see & sketch some of the civil projects we're involved with, to show the side of the war that the press seems helplessly (willfully) incapable of showing the American people. It's beginning to seem more than a bit purposeful that they're not showing these things.

I’ll keep you all posted, as much as I can, on where I am and what I’m doing. I cannot get into any details, as you can imagine, given the operational security that is necessary in these matters.

I’m having trouble posting the images from here at Camp Fallujah, so I’m having to shrink them severely and email them to my wife, for her to post on the site (the shrunken size is why they're a bit hard to see. We'll try to remedy this, somehow.) 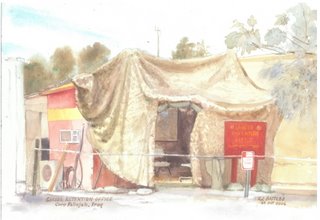 Here are two images I just completed. The watercolor is the second version of the Career Retention Office, an image I was intrigued with, due to the camouflage netting and the bomb part in the front (I love the unintended irony of that, given that one would think that this office would want people to be drawn to it, and yet it has this fake bomb and sign that says "NO PARKING ANYTIME"). They are great people, in that office, and helped me out by giving me a tour of the base and a nice stool to sit on when sketching. 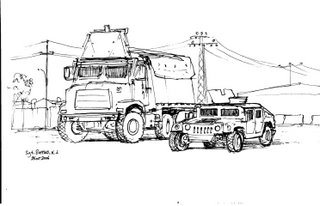 The second piece is a quick ink sketch of a big armored truck and "Humvee" sitting side by side, waiting to go out on convoy. (I can hear the little humvee saying to the big truck, "Hey Spike! Ya wanna go out and chase Insurgents? Huh, Spike? Huh? Ya wanna...?) 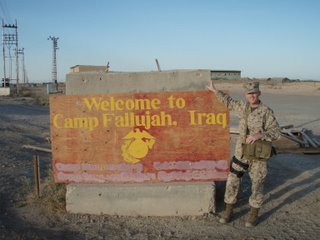 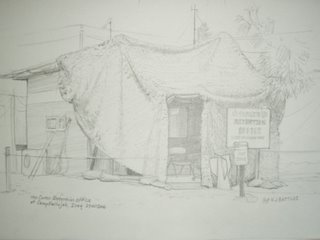 In Country at Last

Sgt Battles has arrived in lovely Iraq, after several days of flights and baggage-handling and check-ins and roll call/flight rosters and on and on...!

I flew commercial through Germany to Kuwait, and waited several hours to get bussed to the Ali Al Salem (sp?) air base with an assortment of army, marine, navy, and air force personnel, as well as several civilian contractors. After a short flight in a C-130, I arrived at an airbase (abbreviated "TQ") on 20 October, stepping down the ramp onto Iraqi soil around 1830 hours local time. It was then a short helicopter ride to beautiful Camp Fallujah, Home of the Thousand Shades of Beige! I arrived around 2230, and Major Durr, another combat artist, met me and showed me the office-- then let me crash in an empty rack at the barracks he was in.

I spent a good day-and-a-half checking in with the various parts of the base that want to know you are here-- admin/personnel, supply, the Sergeant Major and CO of the unit I'm in, etc...

I almost know my way around the place now-- I at least can find the PX, the Laundry, the Chapel, the Chow Hall, the Armory-- every place a marine needs to know about.

I've begun to sketch, and as soon as I get one done well enough to post I will do so.
It's finally time to put all that training and fancy art education to use!! 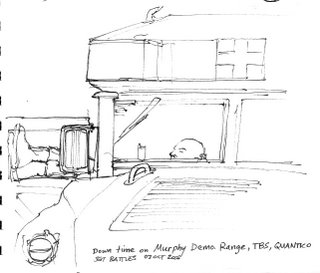 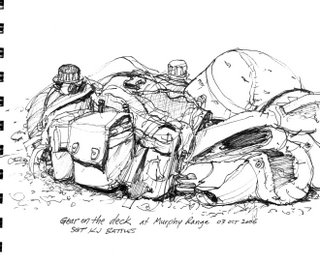 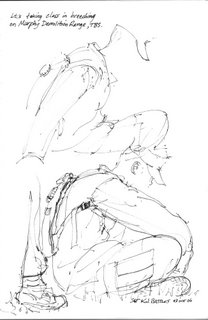 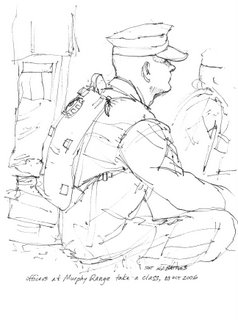 I recently spent a few hours out on Murphy Demolition Range with the Combat Instruction Company, watching the instructors prepare and give lessons in Breaching and Assaulting to newly commissioned Second Lieutenants. I sketched the lieutenants while they were in the classes, and I filmed the final breech & assault demonstration. It was literally a blast! It was good fun and great training.

Here are a couple of the sketches I did. They are loose and (obviously) sketchy, which is the nature of the beast with field drawing. I was using the pen directly, without any preliminary pencil layout. This forces me to develop an artist's eye, and a more confident line . With practice, I think I can keep the freshness of the sketch while developing more efficient mark-making and getting them to a higher finish.

In a matter of days I deploy. The training here has been beneficial, but nothing compares to putting one's skills to the test in the real world. I can't wait to get out there and document the Marines in action!