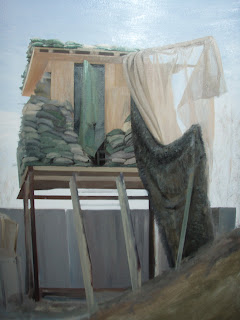 Here's the oil panel of the scene mentioned in the previous post, in process...

Note: The Marines made this guard post almost completely out of plywood, put it on a big steel-girder frame, and surrounded it with sandbags and HESCO barriers. They topped it off with bullet-proof glass panels, and made a screen out of netting to conceal Marines' movement as they ascend and descend the ladder. 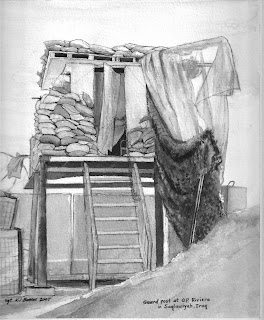 This sketch I did today is a study in ink wash, for an oil painting I mentioned last week titled,"The Corner Office."

Doing a smaller study helps me with the drawing and details of the larger work, as well as the value scheme. As I do the study, I become more acquainted with the territory of the image-- that is, my mind better knows what the subject really is, and it helps me have a more confident brushstroke as I paint.

From ArtLex, the online Art Dictionary:

study - A preparatory drawing, related to a sketch.

value - An element of art that refers to luminance or luminosity -- the lightness or darkness of a color. Value is an especially important element in works of art when color is absent. This is particularly likely with drawings, woodcuts, lithographs, and photographs. It is also true with most sculpture and architecture.

I just finished these two India ink wash sketches, which come from an experience I had while out on patrol with Marines and Iraqi Army forces in November 2006. The Marines were in the process of transferring control of the AO (Area of Operation) to the Iraqi Army, and showing them the proverbial ropes, and giving them an idea of what the area looked like, etc... 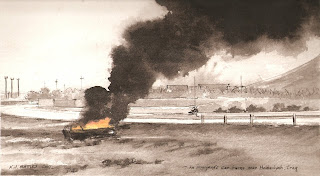 Both the sketches depict the same event --an insurgent car burning. One sketch also shows the patrol as it heads away up the road and back to the Patrol Base.

I used India Ink and watercolor on these, because India ink has a great range of value, and the little bit of color in the fire contrasts the graphic nature of the smoke. Most of the application was with the brush, and bits of line were added with a quill pen.
Posted by Kristopher Battles at 4/25/2007 01:28:00 PM No comments:

In the Words of Other Combat Artists

I just listened once again to an interview online I'd heard in the past, from the radio program Open Source that's worth a listen:


It spends a lot of time talking with several seasoned combat artists--two marines and one civilian: Col. (Ret.) Avery Chenoweth, Steve Mumford, and then SSgt Michael Fay (who was in Iraq at the time) .

They really paint a fuller picture on what combat art is than what I could say. It's worth the time.

A Civilian Combat Artist to See

This is an excellent video featuring a civilian combat artist, New York artist Steve Mumford, who has spent more than ten months in Iraq over the course of 5 trips, embedded with the US Army.

I've had a few email conversations with him in the past, and find him to be an artist who knows his combat art history as well as his combat art. I think he explains the role of the combat artist well in this clip.

You can find out more about him and his work on the web:

It's good to see an artist truly dedicated to authentic art-making-- so much so that he will risk life and limb to go to a war zone to create that art. He is dedicated to telling the story truthfully, and with a fresh artistic style.

I think you'll find that his work-- especially the ink washes-- has an immediacy and freshness that is invigorating.

author's note: this blog entry originally posted in July of 2006. It has since been edited for form and content from its original posting, and re-posted here.

Back in July, I was researching a rather unpleasant subject (involving a controversial photo published in a major newspaper) During my research, I came across something I thought was uplifting and positive:

The comments section on one of the blogs included a great link to a site about Ernie Pyle, and his days as a WWII correspondent.

I also saw a photo on that site about Bill Mauldin of Willie and Joe fame, and it reminded me of his wonderful cartoons that inspired me as a young artist and history lover.

These two men, Pyle and Mauldin, really set the bar for all who take up pen (or brush!) to document war. They are truly role models that deserve our respect and emulation.

These men risked their lives (all of the journalists and correspondents in those days did). Some gave their lives. They all, however, lived their lives and careers fully and with intense national patriotism. And the fruit from their labors was real and sweet.

May America remember the real work of these authentic men-- and may the men and women of this generation take up the standard and carry it forward in truth, honesty and pride.
Posted by Kristopher Battles at 4/19/2007 06:44:00 PM 1 comment:

I just got back this afternoon from an interview on NPR, at their main office in DC. It was a taped interview for the show, "On the Media" and should sometime soon .

UPDATE: the interview will air this weekend, but you can already hear the interview if you click on the link on their web site here).

Altogether, I think the interview went well-- during the interview, however, some of the statements I made in my earliest posts were referenced, seemingly with an eye to highlighting political controversy-- I have since edited those posts, and moved them to another blog, to hopefully eliminate any such controversy, as my goal in this weblog is not to be a political blogger, but to do what I stated in my first post:

"I will endeavor to show a realistic view of the war through the eyes of one on the ground, while also being truthful to the long, rich history of combat art and the art of picture-making itself."

In another part of the interview, some questions were raised as to the artistic guidelines for my work-- what I choose or don't choose to paint about, and why or why not I might paint about certain things. (For example, why I didn't paint a picture of the dead insurgent I saw on one patrol, and why I don't tend to show any negative images, etc...)

I explained in the interview that I believed all artists had a responsibility to be professional and responsible in what they produce, as well as to be faithful in accurately portraying Reality with their work.

Combat artists are not in the business of propaganda, nor do they have any political axe to grind. Rather, they are given the task of going to war and portraying that reality through traditional artistic media.

I think perhaps a lot of people are unaccustomed to what combat art is, and have certain presuppositions about Marine Corps Art and Marines in general. It also seems that some people believe that combat art isn't about truth or accuracy. The body of work in the Marine Combat Art Collection certainly gives no evidence for that assertion. (See other examples here).

And I hope that my answers in the interview, as well as my continuing body of work, will disabuse people of any false presuppositions they may have about combat art.
Posted by Kristopher Battles at 4/19/2007 04:48:00 PM 2 comments:

Another Work in Progress

When I was in Iraq, drawing and painting, one of the things that continually fascinated me was the youth of the marines I saw, and also the working conditions these marines faced day-to-day-- those "obscene amenities" once mentioned... (I know it's cliche to say "they're just kids", but the older I get the younger 20 years old seems!)

At one outpost near Saqlawiyah, I met some marines from "G" Co of the 2nd Bn, 8th Marines, as they were on post guarding an intersection at their Outpost...

These marines had to sit in this guard shack, a little plywood creation on stilts (crude but ingenious) and watch for insurgents who would do them or the local citizenry harm. They were good-natured kids, and I talked to them and took pictures of them while they worked.

I also did a quick sketch of it while I was there, and cut it short due to a fear (i.e. rational concern!) of snipers. I had to do the scene in oil when I returned home, it was such an interesting place.

Here are the preliminary underpaintings/color block-ins of this piece, a Tryptich I call "The Corner Office" (I'll post more photos as the project progresses): 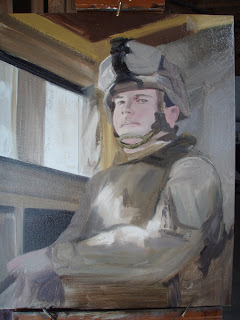 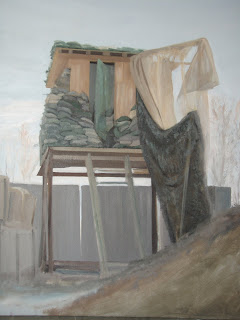 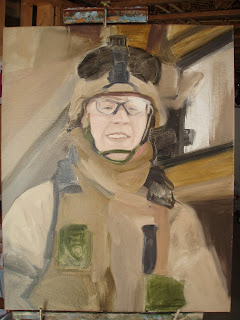 I'm painting them in what I call a Schmidian fashion, after the famous painter Richard Schmid, who has a way of simply and beautifully rendering detail in a painting. I don't know if these paintings will end up beautiful, but I hope the subject will at least be beautifully rendered!
Posted by Kristopher Battles at 4/13/2007 11:24:00 AM 2 comments:

The Not So Empty Canvas

Here's series of photos of a large piece (60" x 30") I've recently begun. The photos will give you a look at how I am crafting the piece, to show an in-process view of one of my paintings.

There are many ways to begin and develop a painting, but in this case I'm trying to be as painterly as I can be, so the finished painting will not only stand as a representation of reality (here, a meeting between Civil Affairs Group and Recon Marines and Iraqi citizens near Korean Village) but also as a painting to enjoy.

Blocking In:
It starts with a gray toned canvas, and a succession of areas and colors placed roughly in. This first layer is called the underpainting, or Blocking In.

blocking in - Laying down the initial statement of a picture by a broad indication of line, color, and tone. After blocking in, artists typically develop their compositions from general to particular by ever-increasingly refining shapes, colors, textures, etc., until an artwork is finished. Also see abbozzo, sketch, and study.

underpainting - The layer or layers of color on a painting surface applied before the overpainting, or final coat. There are many types of underpainting. One type is an all-over tinting of a white ground. Another is a blocked out image in diluted oil paints that serves as a guide for the painter while developing the composition and color effects. Also see abbozzo, azurite, grisaille, pochade, and sinopia.

Here are the Step by Step photos (please pardon the poor quality-- I've got to get a better camera): 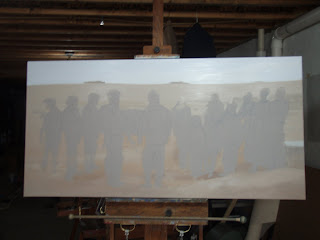 The first area is the sky and background. You can see the toned canvas with basic shapes of the figures. Hopefully, this will show a good relationship between positive and negative shapes. 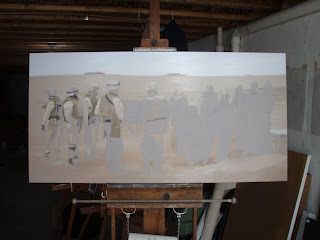 The figures are then roughly blocked in, though not haphazardly-- it's important to me to maintain proper color and temperature, while establishing value relationships as well. If I can get it right now, then I will have less to adjust later, and the painting will also maintain a good "painterly-ness". 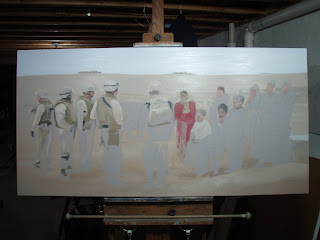 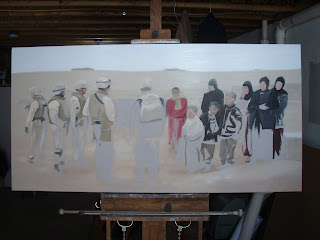 More and more of the Blocking-in comes together: 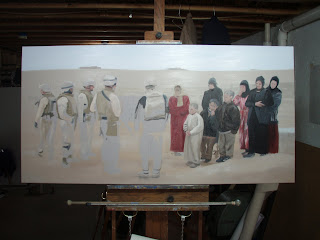 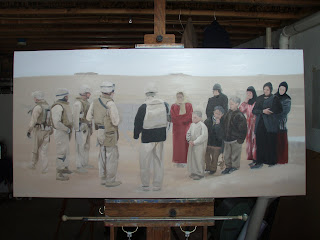 Some details of the figures on the left: 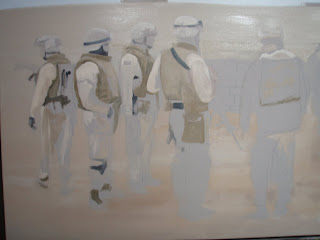 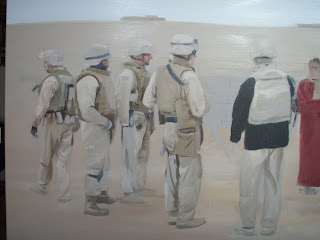 Some details of the figures on the right: 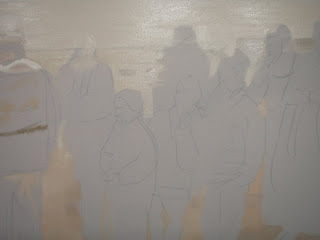 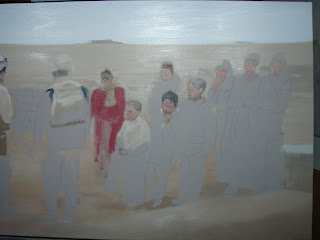 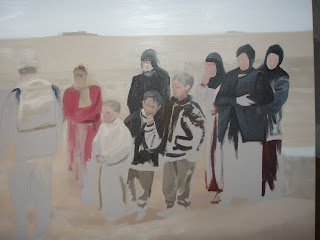 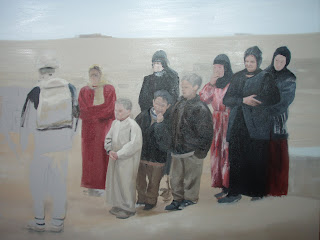 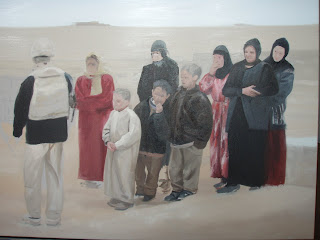 I'll keep you posted as the blocking in progresses, and I'll show the middle and end-game steps in the painting process, so you can see the whole thing from start to finish.
Posted by Kristopher Battles at 4/13/2007 09:22:00 AM No comments: