Last Saturday night, I was honored to be invited to the Marine Corps Heritage Foundation's 2010 Awards Dinner, where I  was selected to receive the Colonel John W. Thomason, Jr. Award for combat art, specifically for my work from deployments to Afghanistan and Haiti.

It's a huge honor, and something that I will be proud of years from now when I look back at my time as a combat artist. To be honored for doing the best you can at what you are called to do, and what you love to do, is truly rewarding.
Posted by Kristopher Battles at 4/29/2010 07:32:00 PM 5 comments:

I was reading excerpts from the PBS program, They Drew Fire, and was once again refreshed in my combat artist's spirit, in drinking from the source well of Marine Combat Art-- the writings of Brigadier General Robert L. Denig, Director of Public Relations for the United States Marine Corps in World War II.

He was the creator of the first iteration of the Marine Corps Combat Art Program, which was part of his "Denig's Demons"--  photographers, journalists and artists recruited and trained as Marines, and put into the action to record reality on the front lines.

In describing the purpose for his new Program, he stated:

"Art at any time is food for spiritual growth. The centuries have proved it so. At peace or at war, man cannot live by bread alone. A special case for art in time of war may be made, for it is then that man's spiritual, as well as physical, being is most severely in need of sustaining strength. Whatever provides the people good cheer, material for reflection and inspiration is an essential contribution to a nation's total effort. This is a people's war. The people want to know, need to know, and have a right to know, what is going on."

Gen. Denig also addressed the value of an artist vs a photographer (perhaps even then the photograph was on the ascendancy, and people may have been wondering why the artist was necessary):


" The combat photographer must snap his picture of an action as it happens. If he is busy taking part in the action, as he so often is; if it happens so fast he is unable to adjust his camera in time; if conditions are not good, the action is never recorded- and the picture is never made. The artist, on the other hand, with his photographic eye, can take part in the action, and then paint any moment of it from memory at his leisure.  The painter can provide his own lighting; he can give a picture any degree of intensity he desires. He can reconstruct a scene from whatever angle he considers most dramatic, centering attention wherever he wishes."

These artists, photographers and journalists called "Denig's Demons" provided vital information to the public during the war. The American people also gained a large collection of rich and dramatic imagery which gave them a no-frills picture of a difficult and necessary war-- and perhaps the art gave the nation the "good cheer, material for reflection and inspiration" it was so desperately needing.

Since last fall, I've been working with the folks at HQMC PAO,  who asked me to help them create a series of graphic illustration pages, which tell the true heroic stories of Marines who have been decorated for valor. The series is titled "Sharing the Courage-- Stories of Marine Corps Heroism".

We just sent off the second one to be published, and it details the heroism of Cpl Jonathan Yale and LCpl Jordan Haerter, who stood their ground in the face of death and saved the lives of 100 people at Joint Security Station Nasser in Ramadi, Iraq in April 2008.

Here is the art, which we have formatted to be similar to a graphic novel (without looking too "comicky"), so that young Marines and people in the culture can be informed and inspired by the actions of real life heroes. 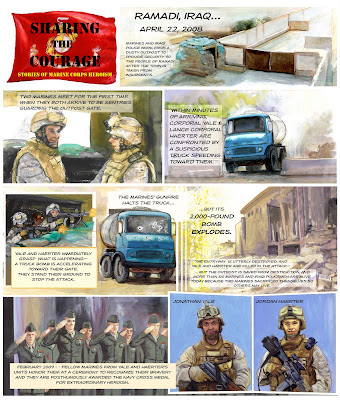 For more information on what happened that day in Ramadi, go here.
This project has made me better appreciate how, even in this day and age, there are still regular Joes, who when put in dangerous and trying situations, come out as honest-to-goodness heroes.
Posted by Kristopher Battles at 4/25/2010 04:41:00 PM 2 comments:

I was able to find a large enough scanner to scan in two of the bigger watercolors I did when I was down in Haiti in February!

The first watercolor is of an old wreck at Carrefour, where the Marines of the 22nd MEU had their BLT 3/2 CP --"LZ Argonaut" it was designated.  Specifically, the painting depicts a helo- a "Huey"- heading out from LZ Argonaut, passing above the old wreck of a boat, the victim of some past hurricane or tropical storm, while Haitian children play on its deck and swing from its ropes (a mercy ship and an Italian aircraft carrier are also visible in the background): 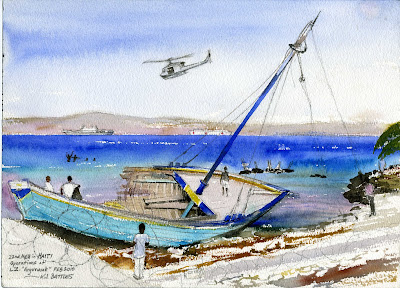 The second image depicts a Marine providing security near Distribution Point 16 in Carrefour, Haiti.
One of the Shanty towns that sprang up after the Jan 12th earthquake is also featured (poverty like this really is breathtaking): 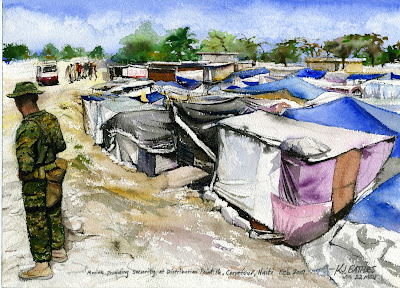