"Marines Fall Forward"
67 years ago, from 20-23 November 1943, Marines from the 2nd Marine Division assaulted and captured Tarawa atoll from the Japanese, marking the beginning of the hard amphibious campaign in the Pacific during WWII.


Great examples of Marine heroism came out of the three day battle, where Marines went forward against terrible opposition-- and the Marine Corps itself gained not only glory, but also hard-gained experience which would prove invaluable in the years ahead.

Some great combat art also came out of the battle, as several artists, like Richard Gibney, Harry Jackson, and Kerr Eby, were witnesses to the battle.  These men went through the hell of Tarawa, and created powerful images based on their experiences. They're worth a second (and third and fourth...) look.
Posted by Kristopher Battles at 11/21/2010 10:47:00 AM 1 comment:

They may look strange without their bodies-- but don't worry; they will soon be developed.  I only have to get some models to pose in the exact positions a mortar crew does while firing rounds, and then I'll build up the figures.
Posted by Kristopher Battles at 11/20/2010 07:39:00 PM No comments:

Working on the kevlars I'd cast recently in wax--

The basic kevlar form
(I cast this so that I could have a bare kevlar if needed for a particular sculpture, and also so that each "cammie cover" I sculpt will be unique for each individual): 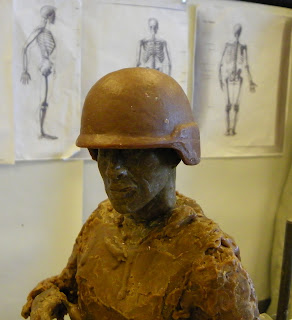 Now comes the "cammie cover"--  I rolled wax and put it on the helmet's front and sides, to make for smooth transitions where the cover stretches over bill and side forms: 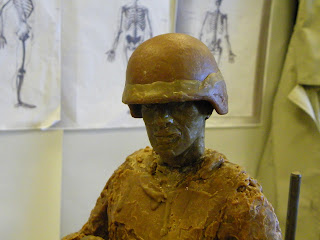 :
Then, I began applying a very thin layer of wax, very much like an actual fabric cammie cover: 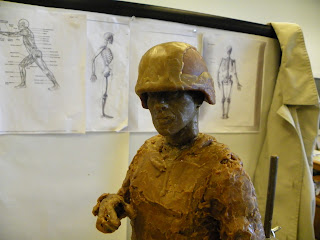 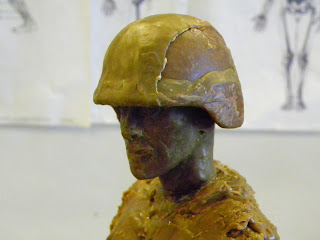 Thin wax is applied to the sides:
Once the cover was fully applied, I worked the surface to begin forming the folds and seams: 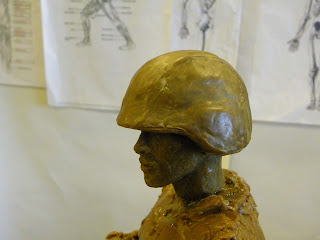 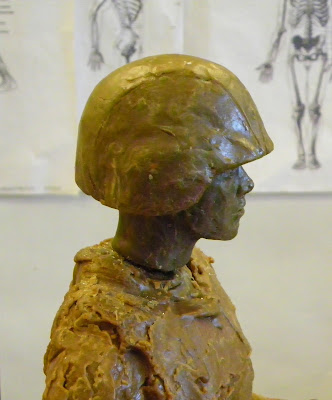 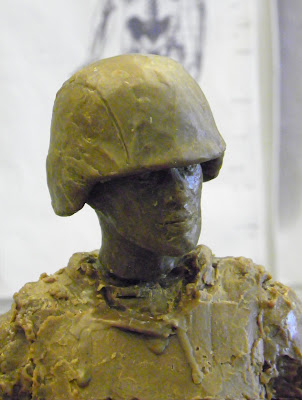 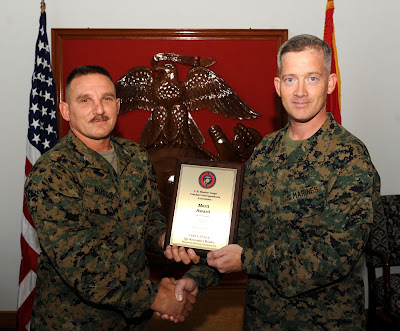 Well, none of us lives forever...


I just found out about the passing of one of the greats in combat art-- Howard Brodie, who sketched his way through several wars, producing some of the best war art in history.

He made some powerful images...

His expressive line, and talent with the pencil, makes him one of the artists I (and I'm sure many combat artists as well) look to for inspiration.

As you know, I've been working for some time on a sculpture of two Marines in Belleau Wood. Well, I'd been having trouble sculpting the heads, and decided to start over on them and rework them to a better level of quality.

I figured that today, Veterans Day (originally Armistice Day), would be a good day to work on these WWI figures.

Here was the process involved in making one of the heads:
I started, using the 1/4 scale pre-cast skull I'd made for just such a contingency 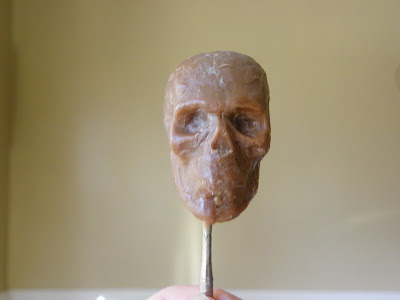 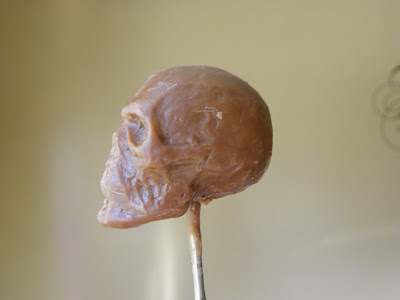 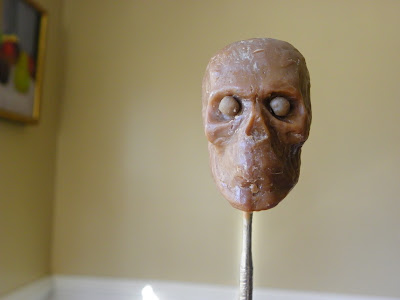 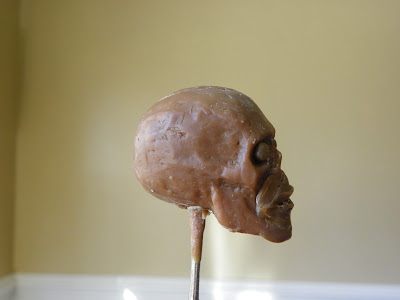 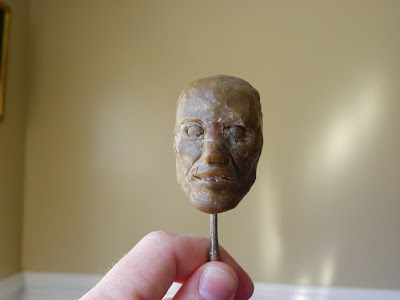 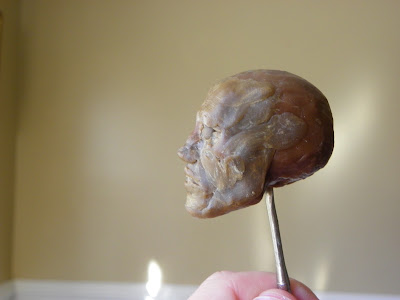 I continued the fleshing-out process until the head started taking on lifelike qualities... 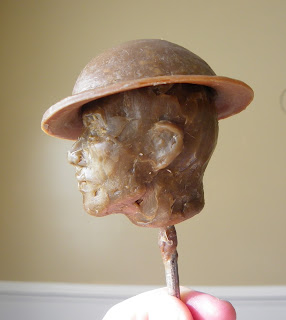 With the helmet added, one can see how the finished product might look 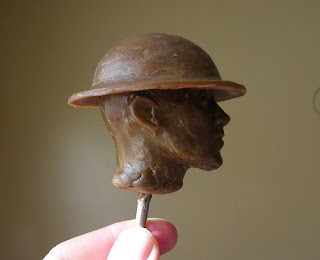 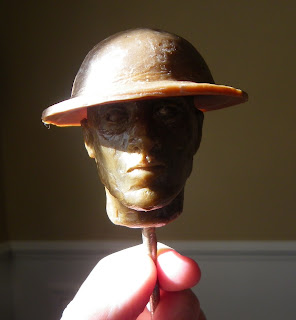 Back in June, I had the privilege (and challenge!) of attending Mountain Warfare Training Center near Bridgeport, California, where I drew, sketched and photographed my way around the area, covering the training of several of Reserve units, including 1/24, 1/25, and 3/23 during Javelin Thrust.

The two-week exercise took place at both Mountain Warfare Training Center near Bridgeport, CA; and both Hawthorne Army Depot and Hilton Ranch in Nevada.

One event which will stick in my mind forever, was the "movement to contact" I did with members of 1st Bn 25th Marines in the mountains.


If you've ever humped in the mountains, you know what kind of challenge it can be-- a 4-klick movement to contact in the mountains really means 10 klicks by the time its done!

We finished the movement to contact, attacked the objective, and marched back to camp on the roads. I had an old, loose-fitting pair of boots, which began to give me pains after only a klick or two. By the end of the forced-march back home, which was a lot of down-hill stepping, in which my toes were rammed into the fronts of my boots, over and over, heating them up and forming serious blisters on several toes.

The Corpsman went around after the event and we took off our boots to be inspected.
Most people had survived the day with little or no problems, but several of us had blisters and hot spots on our feet... I was one who had some serious blisters! We were sitting there, with out boots off, letting our feet dry and rest, and being inspected-- and those who needed it, got treatment.

After getting some care, I went around, taking photos of some of the Marines, and saw a young marine sitting with his feet on his boots, his socks draped over his leg, with a sad look on his face.
It stuck out to me as an almost Rockwellian image.

I sketched him, but I also took photos, because I knew I had to capture the color of the scene as well.

Here's the Painting, "Bridgeport Blisters" in process:
Step One-- the Toned "Imprimatura": 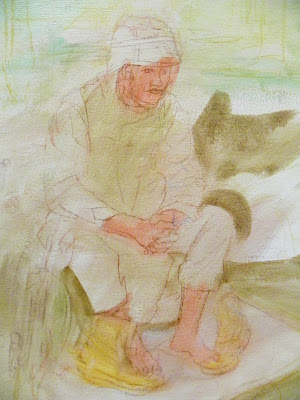 After the Imprimatura, I begin the process of "blocking in" the colors, also called "underpainting"... 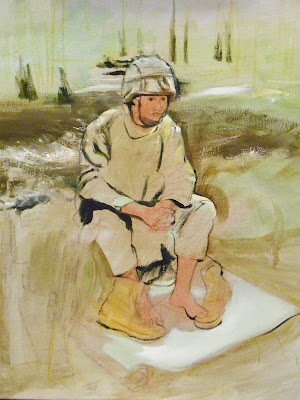 When blocking-in, it's best to use the general rule of applying my "lightest lights and darkest darks"... 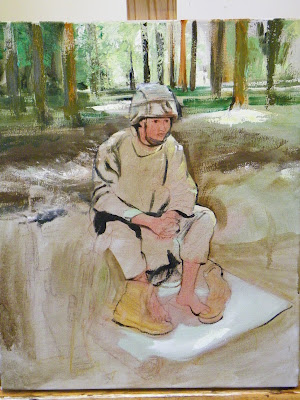 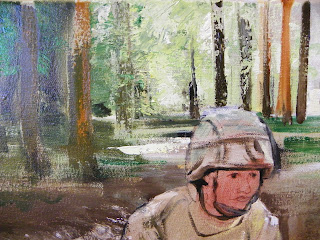 The underpainting of the figure and objects in the foreground is primarily "Coyote" tan/green (which makes sense, as that color runs throughout the MARPAT woodland pattern! Over that I will scumble and drag color across the undertone, to create the digital look of the cammies and gear. 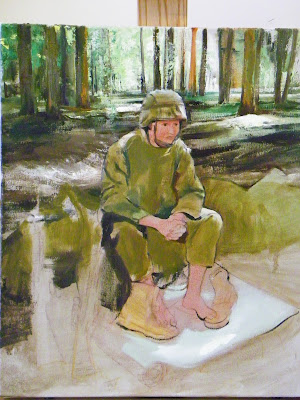 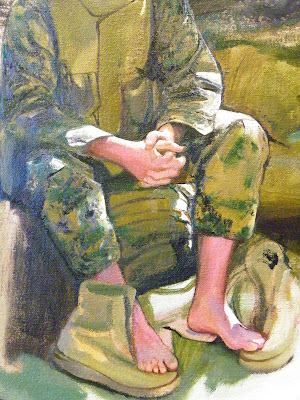 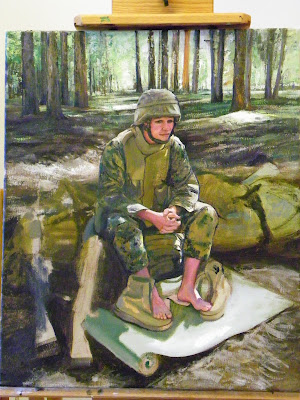 A few more layers, and some detail on the face and gear, and you'll be able to sympathize with a young Marine who's feet have seen better days..!