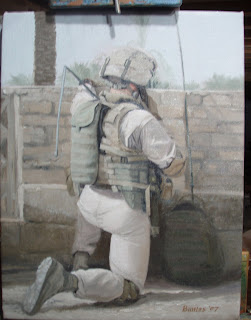 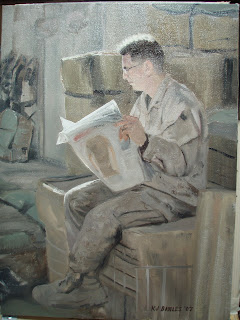 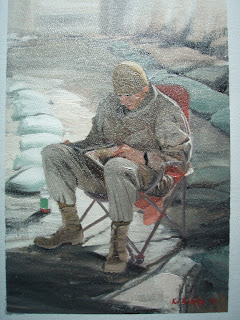 These oil sketches are studies, once again, for larger paintings I'm going to work on.

The image of the Marine on the radio is one of Capt. OJ Weiss, whom I'd sketched in pencil as he called in fire on an insurgent house back in November 2006.

The two sketches of Marines reading are from a series of photos I took while spending time with the 3rd Battalion 2nd Marine Regiment near Habbaniyah. They may not be scenes of action, but they are part of a series I've been doing, of images that emphasize the more banal aspects of Marine life in a war zone.

I'm learning a lot about quick rendering, and direct painting, from these studies. I believe that the techniques learned in these will spill over and bear fruit in the bigger works.
Posted by Kristopher Battles at 6/19/2007 11:38:00 AM 8 comments: 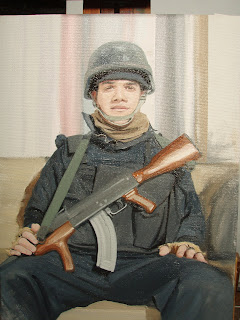 This is the latest in oil sketches and portrait studies I've done, and I'm pleased with it, as this one was done Alla Prima, sometimes called Au Premier Coup-- that is, in one setting, in one layer of paint.

It was done from a sketch I did and a set of photos I took when I was in a small Iraqi town called Anah. The 4th Civil Affairs Group was conducting a CMOC, and the Iraqi people were coming in, and the Iraqi Police and Army were doing security along with the Marines.

I saw this Jundi/IP sitting on a bench, and I talked with him (brokenly) and sketched him in pencil, just before he had to leave on a patrol. I took some photos of him, too, and decided recently to do an oil portrait of him.

The above is the result-- it's not a highly finished oil portrait, but I feel that it came out really well as an Alla Prima work, which was creatively "therapeutic" for me. I am moving more toward this kind of direct painting, because when done right, the paintings have freshness that more classically finished paintings sometimes lack (and you get more of them done in less time!).
Posted by Kristopher Battles at 6/05/2007 04:19:00 PM 12 comments: