I just read a great feature story about Gale Munro, head curator (and my boss) at Navy Art, and how Gale and the staff at Navy Art cherish the art under their care--and will take great steps to bring lost or "misappropriated" art back into the fold. 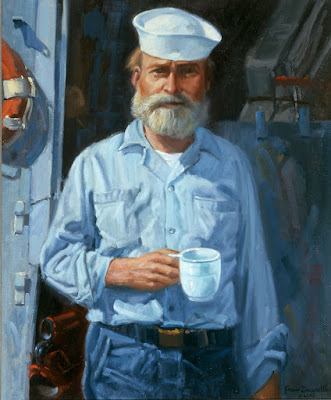 I've been doing a lot of visual research recently as part of my professional artistic development, being still somewhat of a neophyte Naval Combat Artist. In my research on Navy art and artists, I have found quite a few artists of note, especially when it comes to the combat artists of World War Two.

One of these great WWII artists is McClelland Barclay, an artist who had made a name for himself as an illustrator before the war, and who did some of the great Navy art of the period. He served faithfully, creating powerful art for the Navy and his country, and gave his life in that service (he was lost when LST-342 was torpedoed in the early morning hours of July 18, 1943 off New Georgia. Part of the wreck can still be seen today).

What I admire about Barclay's work is his use of dynamic compositions and dramatic color. There is a power in Barclay's simple yet realistic style. "Less is more," as the adage goes, and is proven true in Barclay's work. Though almost minimal in execution, his compositions maintain an almost frenetic energy.  All extraneous details are omitted, and all remaining visual elements work together, moving the viewer's eye though the piece, fulfilling the visual and emotional goal the artist sets out to do. 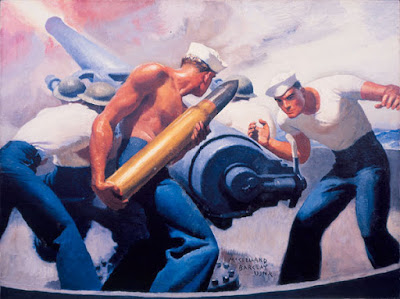 4" 50 Caliber Mark XII Gun Crew in Action Oil on Canvas 1942
by McClelland Barclay (used as art for Navy recruiting poster, "Dish It Out with the Navy - Choose Now While You Can") 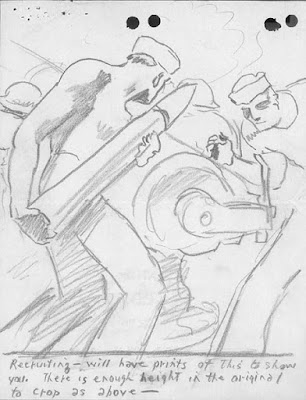 Back Him Up Pencil on Paper 1942 by McClelland Barclay
(original concept drawing for art used in recruiting poster, "Dish It Out with the Navy - Choose Now While You Can") 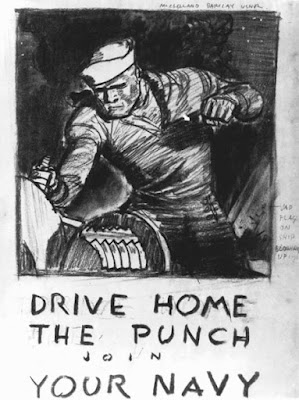 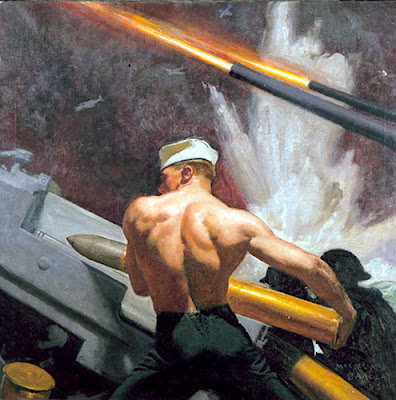 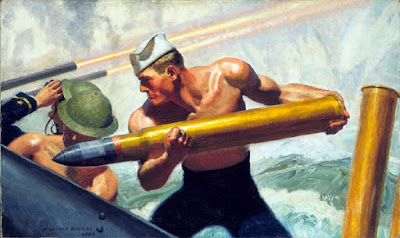 Sailor Loading Fixed Ammunition Oil on Canvas 1942 by McClelland Barclay
(used as art for Navy recruiting poster, "Man the Guns--Join the Navy")
Barclay's WWII Navy work is powerful, given the choice of subject matter and his method of depicting the strong young men fighting for our way of life (some have described a homo-erotic subtext to his Navy work, though I won't go into that here. Barclay's pre-war work, a lot of which was pin-up or "cheesecake" art, could be said to glorify the female sensual ideal. So one would probably have to categorize his work more as worshiping the "young and beautiful" than promoting eroticism). 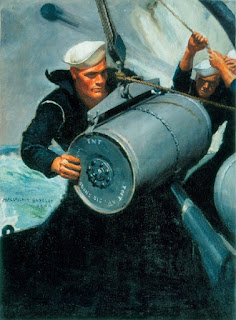 Blue Jackets Loading A Depth Charge Rack Oil on Canvas 1940-42 by McClelland Barclay (used as art for recruiting poster, "Sub Spotted-- Let 'Em Have It!  Lend a Hand - Enlist in Your Navy Today ") 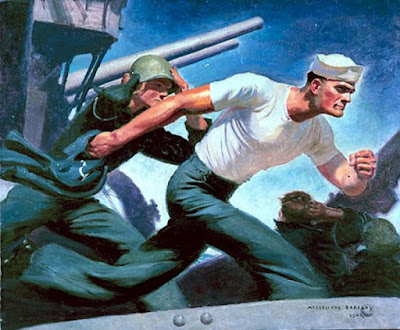