Sketching from Life is Truly Living

I'm posting a few of the sketches from my recent deployment to Iraq- the veritable resort area known as Al Anbar Province(!)-- specifically, the sketches I did from life, as I was seeing it...

Many artists work from photos, and that is useful (much of my oil painting is studio-done from photographs I've taken)-- but there is nothing quite like getting out, getting a life, and sketching it!

If Drawing is truly the Mother of all Arts, then Sketching is the Grandmother! All art comes ultimately from the Sketch. If you can get yourself out into the world, sit in front of an interesting subject and sketch it, your art will strengthen, sure as shootin' (no pun intended from the combat artist!)

Many times your sketches may not be perfect-- proportions are a bear! But sometimes these imperfect sketches have a life to them that's worth showing. So get out there and sketch!!


Charcoal sketch of Marine on improvised Rifle Range (elevator of USS Wasp)
Ink drawing of LtCol LeBlanc as he gave a pre-flight briefing in the Ready Room of Wasp
Pencil Sketch from the jumpseat of an Osprey, as LtCol LeBlanc taxis at Al Asad air base in Iraq
Pencil Sketch of VMM 263 Marines on the flight out to the USS Wasp
This pencil sketch of Marines being transported in Al Anbar isn't too well-done (I mentioned proportions earlier) but I find it interesting nonetheless.

Ink sketch of Ospreys on the Flight Line at Al Asad


Pencil Sketch (note the smudges from vibration of aircraft!) of crewman Cpl Cowan, waiting for takeoff at Al Asad
Ink sketch of Sgt Aguilar on a flight from Korean Village, Iraq 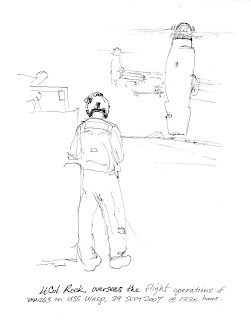 The Ospreys are Deployed!

It's been a while since I last posted, but there's been good reason.

In September, I deployed to Al Asad, Iraq with VMM 263, the Osprey Squadron, on the beginning of its historic deployment-- the first deployment of the Osprey to a combat zone.

They are an incredibly professional bunch of Marines, aware of their place in history and the role they play in Marine Corps aviation. They are a serious group, and do their job well -- but they are also a friendly bunch of Marines. They really made me feel welcome and part of the group from day one.

I hitched a ride on one of their birds out to the USS Wasp, where we floated across the Atlantic and Mediterranean, through the Suez, and eventually flew into Iraq.

I sketched and painted my way with them, and became an honorary "Thunder Chicken."

Here is some art of mine from the deployment (more to come): 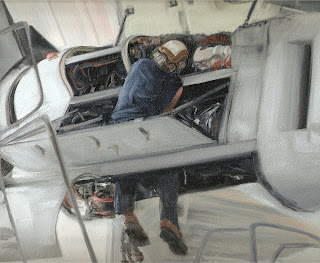 This is an oil sketch on paper, of a civilian contractors working on the nacelle of one of the aircraft, before we flew out from New River, NC. 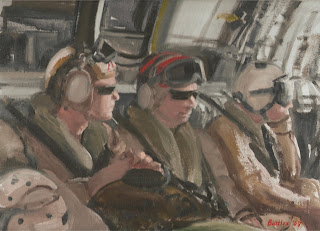 This is an oil sketch, done from a sketch I made and photo I took while on our flight out to the ship we sailed on to Iraq. These gentlemen are members of VMM 263, who are part of the contingent that traveled by ship across the proverbial pond: Mitchell(not visible, except for the top of his cranial helmet) Wearmouth, Kinchen, and "Doc" Jones)... 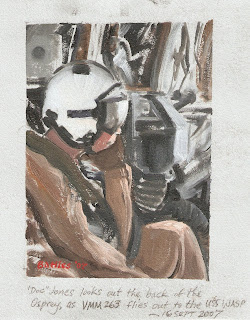 Another quick oil sketch on paper, of "Doc" Jones looking out the back hatch while in flight... 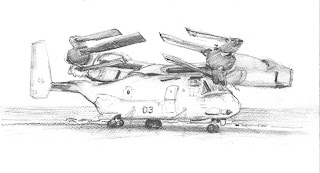 This is an Osprey with its wing rotated in line with its fuselage, while it sits on the deck (and let me tell you, it's hard to sketch on the deck of a carrier!) 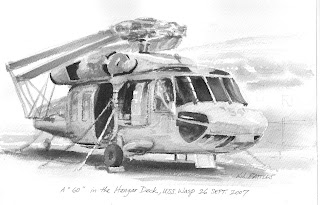 I sketched this "60" while it sat in the hangar deck of the Wasp-- it's India ink wash on watercolor paper.

To get to Iraq, we sailed into the Mediterranean, and thus passed by the Rock of Gibraltar-- I sketched it as we went by, and watercolored it later, below deck...)

This is a symbolic sketch, of one of the CH53s from the departing squadron, as the Ospreys came on board for duty in Iraq (note: I was told by the squadron that this particular CH53, #20, is the oldest one in the fleet, originally being delivered to the Corps in 1967-- one year before I was born!) 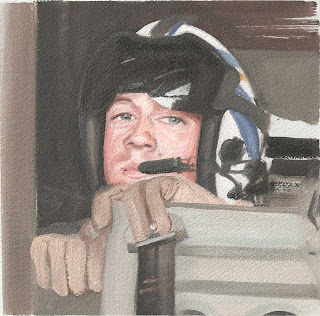 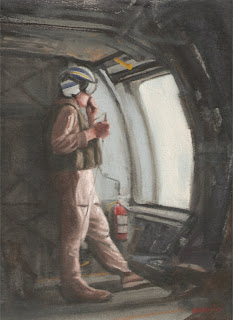 These two oil sketches are of Cpl Cowan, on of the flight crewmen, done from photographs I took while we were on a flight out to points West in Al Anbar Province... 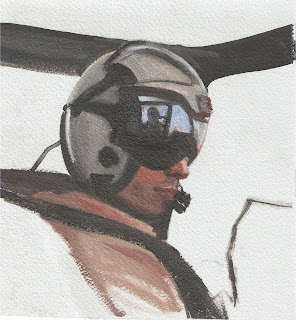 This is one of the "Thunder Chicken" pilots (aviators!) Capt Arnold... It's hard to tell who it is, due to the helmet and visor, but it still was a fun sketch to do.

It was a great deployment, and I'm glad to be safe back home, where I will work on bigger oil paintings of the images I gathered while overseas. Stay tuned...