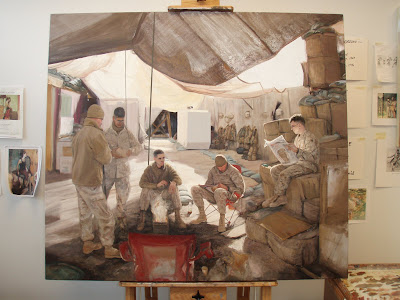 Here are some detail shots: 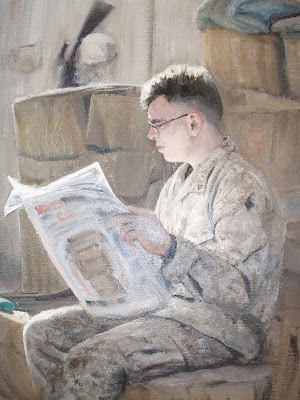 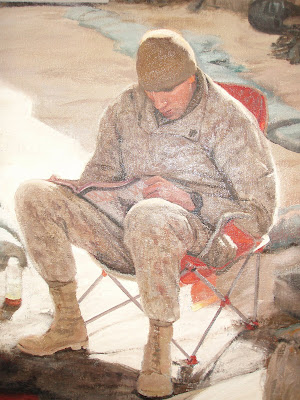 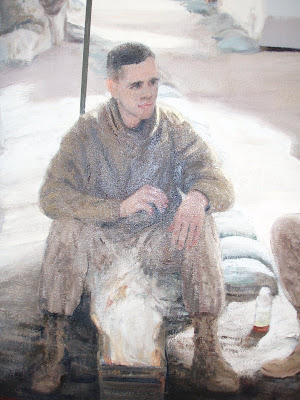 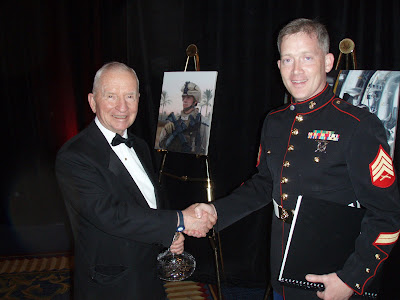 On Saturday, my wife and I attended the 2008 Marine Corps Heritage Foundation Dinner & Awards Ceremony up at the Marriot in Chantilly.

In attendance were generals and a former Marine commandant (Gen Jones), many influential businessmen and donors, as well as Mr. Ross Perot himself (namedropping!) who also received an award and who was kind enough to stop and pose with me in front of my art.

It was a great time-- the food was incredible, and the speakers and host made it lively and interesting (and what made it even better was that I was honored to receive the John W. Thomason Award for my art about OIF.

The Colonel John W. Thomason, Jr. Award was established in memory of this decorated combat officer, known for his artwork illustrating Marines in World War I, China, and Latin America. It is given for excellence in the fine or applied arts, including photography, in depicting the historic or contemporary Marine Corps.

More photos showing the development of the painting I'm working on, the FOB scene from Iraq: 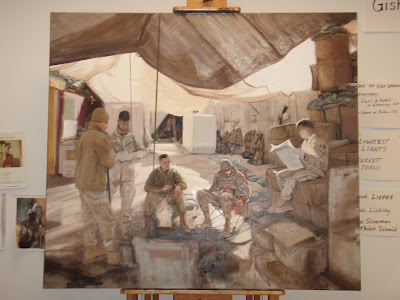 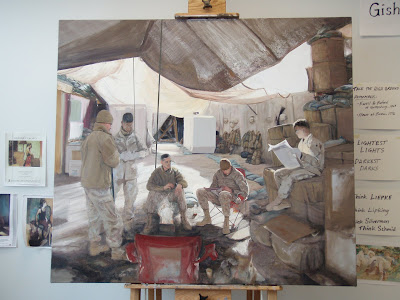 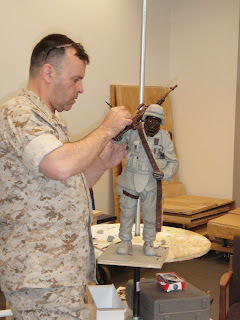 The new Painting is coming along quickly.

I am painting in a loose style, being as gestural with the brushstrokes as I can, and amping up the texture as much as possible. I'm using larger brushes, as well as palette knives to help with this. I'd been getting in the rut of painting too detailed, being a slave to a type of photographic realism, and I wanted to paint with painterly gusto.

The scene is from my first deployment to Iraq, in November 2006, when I was out near Habbaniyah, with Lima Co 3/2, at one of their FOBs, OP Broncos. I took a lot of photos and did a lot of sketching at the time, and went out on several patrols with them, to see how they lived and worked and record their activities.

One morning, as I walked into the area depicted here, I saw the way the light was cascading on everything, and the way the Marines were sitting there, reading and keeping warm by a small fire, and I knew I'd have to paint it. It not only served as an historical scene, as a picture of life in an outpost, but also as an artistic investigation of light (who's Thomas Kinkade kidding with his art title, anyway?!) ...

The Marines depicted here were reading books and magazines they'd received from Stateside, and were shooting the breeze, before getting on with the duties of the day--standing post, patrol, etc.

Here are the stages of the painting so far:

The Drawing (This is important, as the phrase I heard Schmid say, quoted from the French Academy, "Well Drawn is Well Painted") 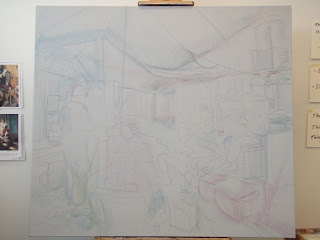 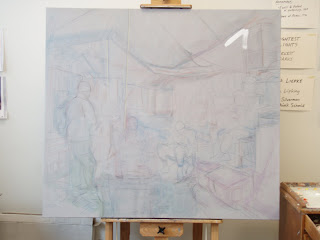 Establishing the Lightest Lights (I got that from Charlie Grow here at the Combat Art Program. This helps a lot later on in keeping high values and avoiding muddy or unexciting paintings...): 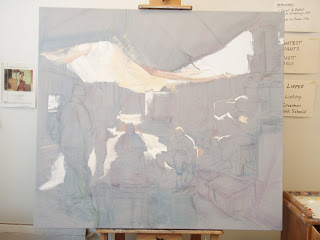 Establishing the Darkest Darks (Once this is done, along with the lightest lights, it really helps fill in the middle ranges, where the transitional forms and values make a painting richer): 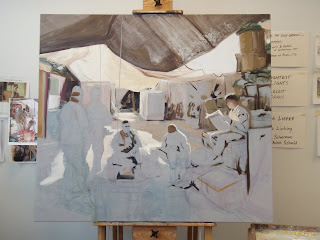 Then Flesh it out (Here the painting is in its youth, not fully grown, but beginning to stand on it s own...): 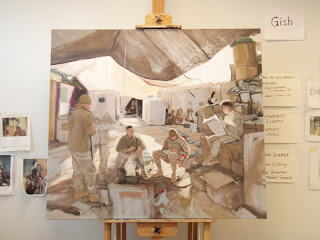 If I can maintain the sort of controlled frenzy each time I approach the painting, I may be able to save a lot of time and worry, and have a dynamic painting to show for it.
Posted by Kristopher Battles at 4/19/2008 09:35:00 AM 1 comment:

I have been busy lately, working on administrative things for future promotions and deployments, as well as working to finish some things I've been putt-putting around on in the studio...so I have little to show you visually (yet)--

I can report, however, that I have just started a sculpture-- MY FIRST ONE!

It's an actual, honest-to-goodness clay sculpture built on a wire armature, and hopefully will be cast-able when it's finished. There are no guarantees on whether the Corps will cast it in bronze, but even if it's not cast, it will serve as a great foundation and practice for future works. I'll show you the photos this week, when I get the next step done...

By the way-- you may think you know how to render and that you know anatomy, until you try to sculpt the human form in three dimensions!

Gunner Fay, who has a lot of experience with the sculpted form, has been teaching me a lot about the physiology of the figure. He's been giving me books to read and websites to check out. It's helped an immense amount. I feel a lot more confident that I can render the figure in both 2- or 3D, after this.