I was tasked with covering the M.O.U.T. (Military Operation in Urban Terrain) training of Marine 2nd Lieutenants on the TBS side of Quantico a few weeks back.
Out of this experience has come several sketches and an oil painting so far, each featuring the new officers getting their first practice taste of urban warfare...
One image that really struck me was of a Lieutenant who'd been "killed" in the training, and was lying there, as many others were also doing, probably contemplating the brevity of life, his own mortality, and the would-be permanent consequences of quickly-made temporary decisions...! 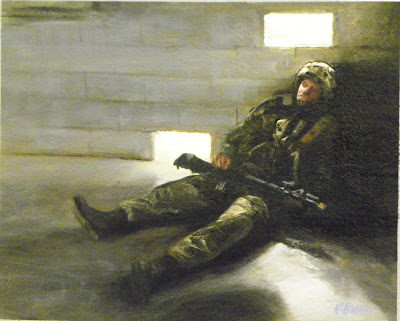