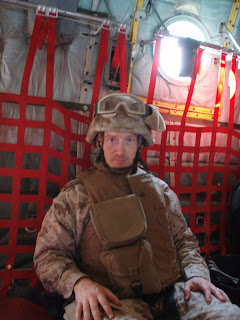 I am happy to report that I am safely back from Iraq (I went to see the elephant, and thank goodness he didn't see me)! Though I went to many places in Iraq--most of them not on the travel brochures-- I was spared from all dangers, and escaped wounding, combat, and major distress.

I left Iraq and arrived at Ali AL Salem airbase in Kuwait on 17 January 2007, stepping down onto the tarmac, a free bird off the Freedom Bird! (see the photo of my boots on the asphalt...) 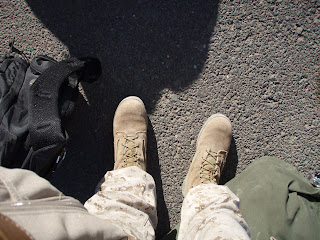 After a gruelling experience involving the paperwork required to fly my weapon back with me out of Kuwait, I boarded a commercial aircraft on 20 January at the Kuwait Airport and flew across the sea. The flight lasted over fourteen hours, but the movies and the meal were good, so it was overall quite bearable.

I reported to Camp Pendleton the same day, 20 January (due to the dynamics of jet travel and changing timezones, 20 January lasted more than 30 hours for me!). At Camp Pendleton, I spent a few days checking out of the I Marine Expeditionary Force, the unit I was attached to on my deployment.

Then, after a gruelling experience involving the screening required to fly my weapon back with me out of the San Diego Airport, I flew back to Quantico on 24 January 2007. The flight had a short layover in Ft. Worth which broke up the long distance, so I didn't mind it, though I was longing to see my family.

After a third and final grueling experience involving my weapon (I won't go into details...), I began settling back in at home. Soon I will be back to work in the studio.

Utilizing all the sketches, photographs and video I collected during my deployment, I will create larger, museum-quality paintings and sculptures for the National Museum of the Marine Corps, and the Marine Corps Combat Art Collection.

Thanks for keeping us posted and informed with your great drawings. I hope you continue to show us what you are working on.

Thank you for taking this on. We are proud of you.

Glad you made it back, God Bless ya and your family!

Welcome Home!!
Thank you for allowing us to come on this journey with you!!
Can't wait to see your finished work...

Welcome home, Kris. I'm glad you're back safely. I know you were glad to see your family again.

Glad you are home with your wife and babies. Looking forward to seeing more art.

Behind here. Hadn't seen anything new since the "edge" post before this on and hadn't been back as often as I should have been!! YEAH for boots on OUR GROUND!! Impressive contribution to all of us. THANKS!

My name is Julie, and I'm a research assistant at WETA - public broadcast station in DC. Currently, we're working on a PBS documentary titled, "America at a Crossroad," which examines challenges confronting the US after 9/11. We'd like to get in contact with you to see if we can include your Web site in the documentary. Please feel free to contact me at 703-998-2452 or you can email me at jkim@weta.com. Thanks, and we look forward to hearing from you.

I hope all is well with you and all yours.

I'll be eager to see what you paint on your canvases.

I could choose to fit the canvas print that I was ordering from wahooart.com to the pattern and color of the wallpaper in my living room. I could search
for artwork by subject matter and even predominant colors. Then I customized the frame online because the site
allowed me to match the frame style with different wallpapers, one of which looked like ours.
So now have this canvas print by Pierre Bonnard, http://en.wahooart.com/A55A04/w.nsf/OPRA/BRUE-8LT4PD