Look, Ma, I made the cover! 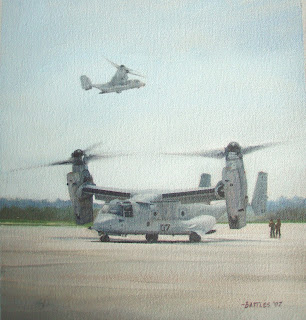 I am about to have one of my works on the cover of Fortitudine magazine, the bulletin of the USMC Historical Program, produced by the History Division. It's a great honor.
The image is an oil painting I did of a MV-22 Osprey from VMM-263 as it is taxiing on the flight line at Marine Corps Air Station New River, NC.
As many of you may know, the Osprey is the "new wave" of Vertical and Short Takeoff and Landing aircraft, and is being used by the Marine Corps and the Air Force.
The aircraft will soon have its debut in a combat environment, as VMM-263 is expected to deploy to the War on Terror sometime in the near future.

Great painting! and Congrats on the cover!

Sir,
Just heard you might be travelling with us on the Wasp. Look forward to meeting you. Love your work, really enjoying the blog.