Last week, some sculptors from Taylor Studios came to Quantico to lifecast some marines for use in upcoming new exhibits at the National Museum of the Marine Corps.

I was one of the chosen few to pose, and was cast as two different figures-- a dead German from WWI, and Floyd Gibbons, a WWI war correspondent. It was fun and painful at the same time, due to the nature of the lifecasting process (we had to sit for long periods of time as they put the rubber goop and plaster cast material on us).

But despite the physical discomfort, It was a blast, and I learned a lot about cold casting and mold making, which will benefit me in the future.

Here are the castings from the week, before they assemble, paint and clothe them --I am the one in the center, as "dead German #2" (photo from Getty Images) 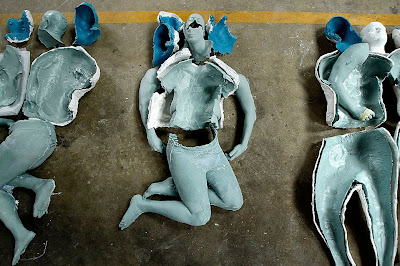