Today's the birthday of Norman Rockwell, born the 3rd of February, 1894 (died 1978).
Regardless of one's opinion of his status in the art world or his place in art history (or the vain arguments about the differences between illustrator and fine artist), Rockwell is widely seen as one of the most talented and well-known image makers in American history. 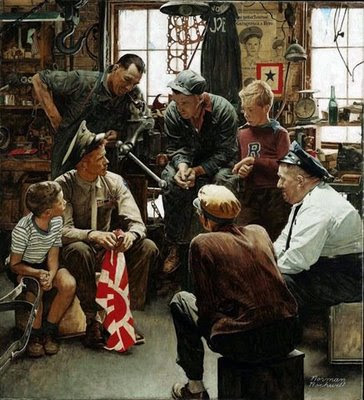 Here is an interesting photo I found today while reading a book by and about one of our WWII combat artists, and currently one of the best Western Sculptors around, Harry Jackson.


Harry was on Tarawa and Saipan, wounded in both actions, before being selected as an official combat artist in 1944. After the war he was friends with Jackson Pollock and several others in the Abstract Expressionist movement, painting in similar manner, before moving out west and pursuing a more representational style.
This photo depicts Norman Rockwell and Harry Jackson chatting in Harry's studio in California in 1945, no doubt the topic of discussion is Harry's combat art... (Rockwell himself was an official artist in the Navy in WWI, but never saw action). 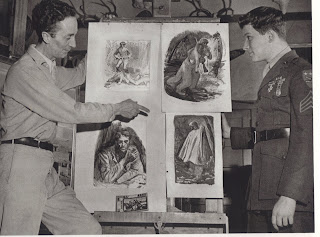