Working more on the "Sharing the Courage" series, #3:

"The Iron Sergeant, Jesse Leach"
I've begun to color in the scenes from the storyboard...
The sequence where Sgt Leach has grabbed a wounded Marine and drags him to cover:

Sgt Leach provides first aid to his Marine, while the Quick Reaction Force is called... 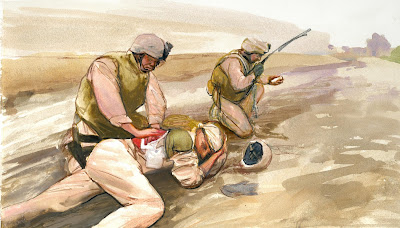 This was a dramatic event which happened in Iraq, to those Marines involved especially. Yet it showcases the type of day-to-day heroism that typifies Marines in combat--  the kind of thing that people back home need to know more about. That's why we are doing this series.
More to come this week... stay tuned!
Posted by Kristopher Battles at 10/17/2010 09:40:00 PM

This is fabulous. It really puts the humanity into the conflict. Can't wait to see more of this series.
Semper Fi!

I just saw this and it took my breath away! I am engaged to this wonderful hero Jesse E Leach! I would love to get a copy of this. My email address and how to reach Jesse himself is mouselover19@yahoo.com.

I lived this nightmare when it happened,but I can say this.Marines do their job well, and this picture is a small reminder of the honor and sacrafices that some of them will go through for another Marine.