Ten Days Out To Sea! Part One-- Out to the Ship

The last few weeks have held a lot in my life, and I have a lot to post!

I just got back the 30th of September, from a ten-day trip aboard an aircraft carrier and two smaller vessels in its strike group.

I was sent by the Naval History and Heritage Command, to deploy aboard the USS Harry S. Truman (CVN-75) and document the life and activities of sailors as they trained for deployment.

I drove down to Norfolk on the 19th, where I took a commercial flight down to Jacksonville, Florida. The next morning, the 20th, I got a taxi out to Naval Air Station Jacksonville to get on a military supply aircraft-- known as a COD (Carrier Onboard Delivery) and was flown out to the USS Harry S Truman, which was not too far out in the Atlantic, undergoing its pre-deployment training, known as COMPTUEX. 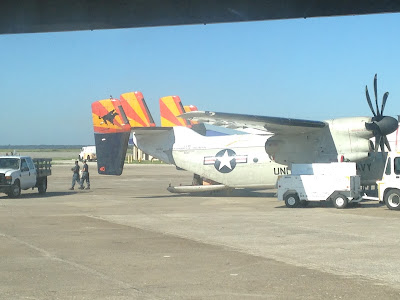 The C-2 "COD" ready to take us out to the carrier. 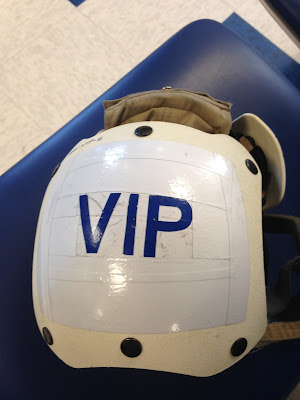 They gave me this "cranial" to wear. "VIP". Crazy, right? It hopefully means, Very Interesting Person... 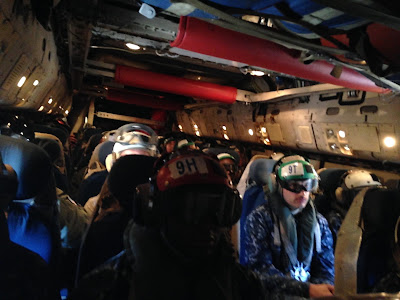 The chairs faced backwards (this is looking forward from the last row). 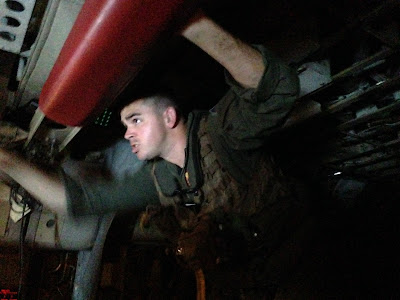 The air crewman, looking forward, getting ready to sit down before saying, "HERE WE GO...!
We'd been told to strap in of course, and when we heard one of the crewmen saying, "Here We Go, Here We Go, HERE WE GO...!" we were to sit back in the seat with our head facing straight to the rear, and await the "trap:" when we'd touch down on the deck and hit the arresting wire, coming very quickly to a stop (from around a hundred fifty miles an hour to zero in around two seconds!).

Well, sure enough, that's exactly what happened and boy, what a rush! I've never felt such a huge force upon my body-- as if I was going to be torn apart. My head was tugged back into the headrest, my whole body was sucked into the seat, as if I were going to be sucked through it.  I can only describe it as feeling like the old sequence in the movie, Star Wars, where they make the jump into hyperspace and the stars rush by suddenly-- or I guess it's rather more like when they come out of hyperspace, and it all suddenly slows down (the only experience to which I could compare the sudden change in speed would be "The Volcano" roller coaster at King's Dominion)!  I found myself thinking, "WE'RE GONNA DIE!!! and then the second it was over: "Can we do it again?!" 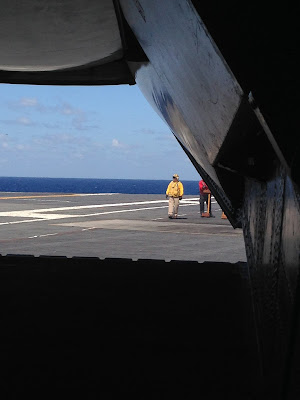 First view out the rear door of the COD, just after landing.
We were told to follow the crewman out of the plane, and we did so. We were led to the edge of the flight deck, down some stairs and into a hatch in the carrier itself, where we were taken to the Air Travel Office and we were checked in. I was met there soon after arriving by LT Tabitha Klingensmith, one of the Public Affairs Officers on board the Truman. She was to be my sponsor while there-- and not only was also a combination of supervisor, guide, event planner, organizer, and agent throughout my stay-- and proved to be invaluable in the successful completion of my art mission. I must say, without her skills in logistics and networking, I would never have been able to fulfill my mission as much as did, which will be evident in future posts on the experience.

I was shown my quarters, given a tour of certain parts of the ship, and within an hour of being on board, I was back on the deck, being led by the Safety Officer amongst the "controlled chaos" that is Flight Deck Operations on a super carrier, taking photographs of the crews at work, and the aircraft and pilots catapulting off the ship!

It was a great start to what would prove to be a very fruitful visit.

This is a really informative knowledge, Thanks for posting this informative Information. Hearthstone Boost