Warrant Officer Mike Fay and I went today to Bethesda Naval Medical Center as part of our duties as combat artists, to sketch and draw the young marines recovering from wounds suffered in Operation Iraqi Freedom.

Talking to these marines was a joy and an honor (needless to say), as they truly represent the good in American youth. All had stories of combat, and of friends wounded and killed in the war. You could see the effect of the war on their faces, many times literally, as they bore scars from IEDs, mortars, and sniper fire.

Here are some of the sketches I did, and though some of them do not do justice to the subject, I thought it would be good to show them, so that people could see the faces of the young marines who have fought and been wounded, defending us in the War on Terror: 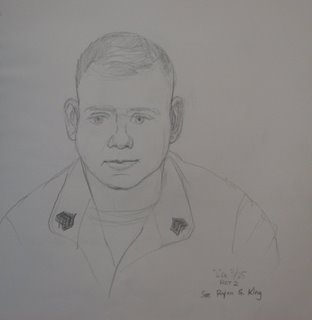 Sergeant Ryan King, wounded by IED. He has had some excellent facial surgery (I couldn't tell that his face and especially his nose, had seen some extensive damage). 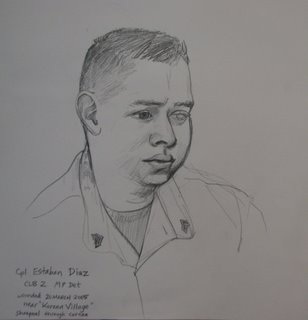 Corporal Estaban Diaz, wounded in the head by an IED, with shrapnel through his left cornea. Incidently, he was born in Mexico, raised in the States a pastor's son, and is still waiting to be sworn in as a US citizen. (Can anyone say, "FASTTRACK this guy?!") 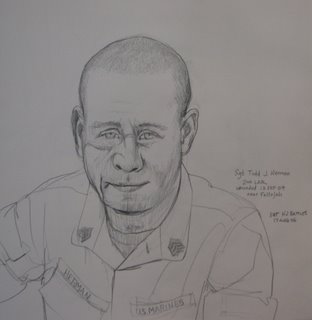 Sgt Todd Herman. The leader of the pack, with natural command presence, yet he's a heck of a nice guy. He's still having surgery on his face after having been wounded in 2004. This portrait isn't a perfect likeness, yet I put it up here because he was such a pleasure to work with and to draw.

I have several more images, which I will post tomorrow. I also hope to have some drawings from Walter Reed Army Medical Center, where Gunner Fay and I will be going tomorrow...
Posted by Kristopher Battles at 8/17/2006 07:21:00 PM

Great sketches. Let the guys know that we all wish them a speedy recovery.

eSketching people from a photo is one thing, but from life is much tougher. There seems to be more pressure when your subject is sitting there looking back at you. You did a great job. I think it would be a real privilege to sketch our soldiers.

Thanks, Kris, for posting these sketches. We need to be reminded of those brave men who are doing battle to insure our freedom.

Thank you for sharing these!

I love your work and would love for you to come to the event my sister and I are throwing....just our attempt to get the guys out and socially active!

I'd also like to discuss with you a project that a photographer friend and I are thinking about doing....

Keep up the great work! If you know anyone that would be interested in coming tomorrow, they are all welcome! Esp the guys up at Bethesda Naval that are mobile!

Great Job ! You have captured some of Todd's qualities.

Please read my entry on Fay's Fire and Ice

Who knows where to download XRumer 5.0 Palladium?
Help, please. All recommend this program to effectively advertise on the Internet, this is the best program!