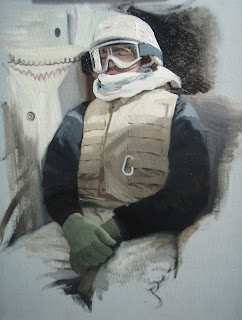 In a couple of weeks, I’m going to begin a painting, based on an experience I had in Western Iraq back in January.

I was riding in an LAV going out to Rutbah—which was an interesting ride, in and of itself. Riding in the LAV were the crew, some other Marines, an interpreter, a civilian contractor, and all our gear. We bounced about for quite a while, with the dust flying, trying to keep our balance and sanity.

As an event, it pointed out to me for me the unique non-traditional aspects of OIF. The work is not just done by people in uniform, as there are so many non-military aspects to winning the peace as well as the war. As a scene, it was very interesting from a formal, visual/artistic perspective.

Above is the oil study I did recently of the “Terp” (as some call Interpreters), as he tried to "catch some Zs" as we rode along.

I am beginning to appreciate some of the reasons classical artists did oil studies of figures they were putting in larger paintings.

My sense is that a Study allows the artist to solve the problems of rendering the figure, before placing it in the composition, and enables the artist to develop the “muscle memory” of how the paint goes down as the figure takes shape.

It’s been helpful, and I will do studies of the other figures in the project as I go along...

So, is this a study for a larger painting? I have lots of questions about doing a "study", but I don't want to be bothersome. Do you just do a "thin" oil painting or do you ever "finish" it out?

Your work intrigues me, Kris. Thanks for the information that you include along with your sketches and paintings.

Very nice work, the gestures bring out the essence of the scene in your work. Just love these sketches. Looking forward to the finish.

Thanks again, Kris, for sharing with us.