While at Marine Week in Boston, I finally got to see the Colonel Robert Gould Shaw Memorial to the 54th Massachusetts Regiment, near the State House and Boston Commons. 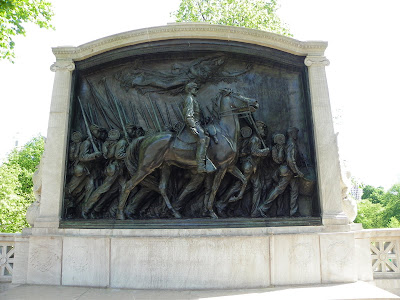 Face of the monument, across the street from the State House 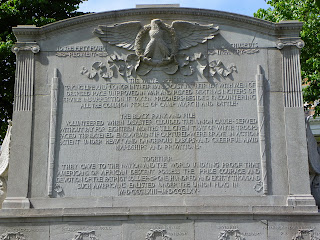 Reverse side of the monument, facing the Commons
A work of true Glory it is!
I'd seen the plaster duplicate at the National Gallery of Art in Washington, DC, along with the great portrait head studies that Mr. Saint-Gaudens did from live models.

This Sculpture took monuments to another level-- a tour guide I met up with there told the crowd there that this was to be his "leader on a horse" sculpture, but he wanted to memorialize the unit as well as the leader.

The sculpture is bas relief, but has in-the-round elements as well. Some of the rifles, the main figure and horse also, are almost completely separate from the background. 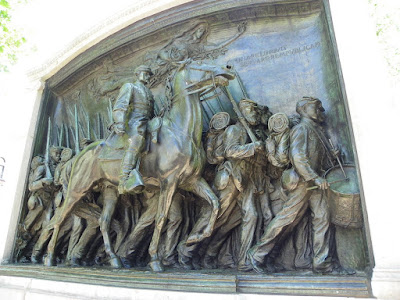 The composition is full of energy and movement, and the faces show intense emotion --even the horse has an expression! An interesting part that the tour guide pointed out is that the soldiers to a man show resolute commitment to their cause, and a firm determination to reach their destination and gain the victory. 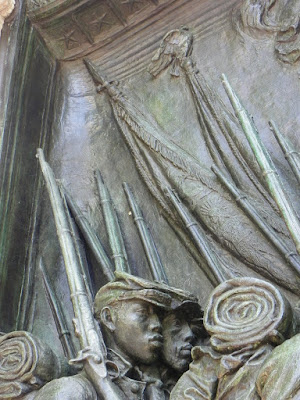 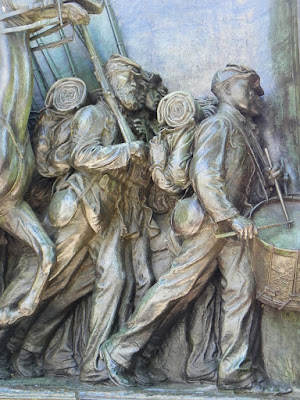 The horse shows fear and trepidation, however, as if he didn't sign on to what's about to happen! 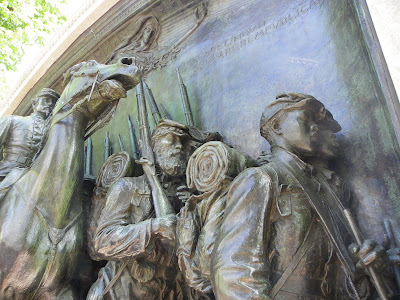 Another very intriguing thing about the sculpture is the angelic lady at the top of the image, floating above the action, watching over them and urging them on. 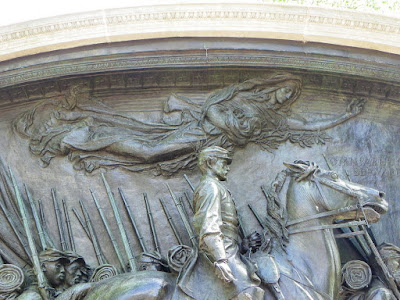 She has been called Lady Liberty, and also Victory-- and yet she's not so easy to decipher.
She carries laurels which represent Victory, yet she also holds poppies which represent blood and Sacrifice (they're slightly hidden and more subtle than the laurels). Her expression is forlorn, as if she knows the coming deaths which will shake the regiment before victory is fully realized-- yet she must urge them on. She thus represents Victory through Sacrifice, and the idea that Liberty isn't free.

The entire monument is an experience in itself. Take the time to go see this monument if you can; whether the original in Boston, or the copy in the National Gallery in DC.

It is not only a breathtaking work of art, but also a great monument to the American struggle for Liberty, and a poignant statement about the human spirit in the face of war and sacrifice.