ART of a Different Kind

You've probably heard the phrase,  "Every Marine is a Rifleman"...

Well, this is not just a phrase with the Marine Corps.

Each Marine is required annually to train with his most important and necessary piece of gear-- his rifle.

It's been a year since I last qualified with the M16A4, and so it's my turn once again to attend a different kind of "ART" class-- Annual Rifle Training, that is.

ART 6-11 (Annual Rifle Training class #6 of 2011) began this week. We began Thursday and Friday with classes in how to handle the rifle, the effects of weather on shooting, what to expect during the course of fire next week, and "snapping in". We also BZO'd our weapons, to make sure our sights were well-aligned. 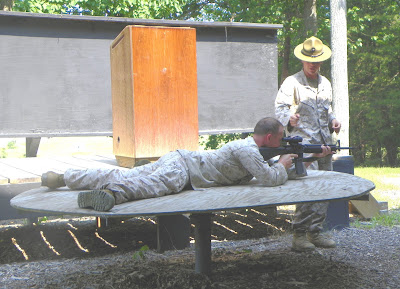 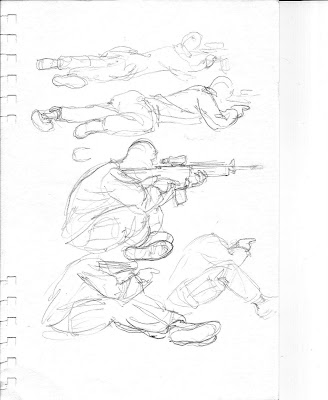 A Marine demonstrates proper variations of the Prone and Sitting positions

I was able to do a little sketching Thursday during the class in the basic firing positions (always difficult because the "model" moves in a few short minutes, and shifts positions as the instructor tells him to!).

Stay tuned, because all next week I'll take my sketchbook, pencils, and art stool-- as time allows I'll sketch my fellow Marines as they live up to their obligations as well-trained riflemen.