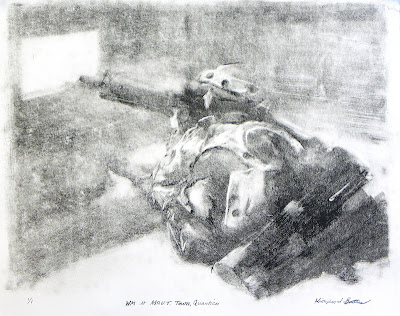 Last year, I had the opportunity to go out to TBS (The Basic School) here in Quantico to a place they call, "MOUT Town" (MOUT= Military Operation in Urban Terrain).
They let me roam around with the instructors and the referees (I think they're called "Coyotes") and take photographs (and sketch if possible) as the young Lieutenants "assaulted" with squad and platoon sized elements into this "town" especially made for this kind of training.

I got the best, most expressive shots when the combatants were inside the buildings.

This is a monotype print I did today based on those photos. It is of a female Marine officer rockin' her M16 out the window of a building (she also had an anti-armor weapon over her shoulder...).