End of an Era

As it says on his latest blog post at Fire and Ice, "All good things must end"...

He is the reason I re-enlisted three years ago, and he is my combat art mentor and "sensei".

Years from now, you will still see his artwork in the history books -- depicting in color, line and form what it was like over there-- when people study the Global War on Terror.

He is a Warrior Poet and Rennaissance guy-- a rare combination, even in a Marine. (He is also one of those kind of guys that has a sign above his head saying, "in case of war, break glass...").

He will be missed in the studio and on base.

But it's not as though he won't be seen again--I believe that one day in the not too distant future, we may very well see Mr. Fay, War Artist, (Civilian) on his business card, and see photos of some guy in a goatee out on a stool, drawing in the middle of a war zone! 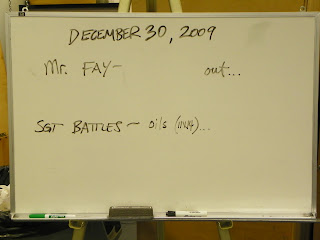 the board in our studio, the day Gunner Fay's finished checking out...