Great Show at the Corcoran Gallery 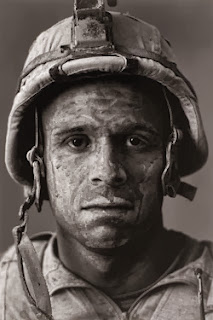 I had the privelege of being able to go see the current exhibit at the Corcoran Gallery in D.C. last Tuesday with some colleagues: "WAR/PHOTOGRAPHY: Images of Armed Conflict and Its Aftermath."
It's a powerful show, and I recommend you see it, if you're able to. NOTE: IT'S ENDING THIS WEEKEND, SEPTEMBER 29th! SEE IT WHILE YOU CAN!

It is also a great overview of how we see war (and in some ways how we don't see it-- there were some very graphic images I'd never seen before, of casualties, military and civilian, which were probably originally withheld from the public). Click Here for the website about the exhibit.
Posted by Kristopher Battles at 9/27/2013 09:14:00 AM