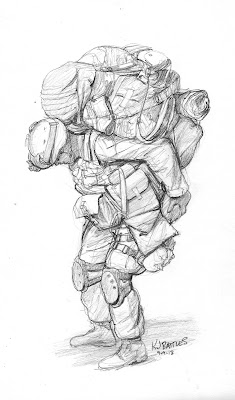 This sketch is of a Marine putting on his pack and adjusting his gear--looking more like a pack animal than an infantryman! It was early in the morning, just before his unit, Echo Company, 2/8, boarded the helos and began Operation River Liberty in Helmand Province, Afghanistan, July 2009.

I was struck by how weighed down the Marine infantry were, and wondered how on earth these men could move with what looked like their entire issue of gear on their backs, including probably something called,  "field sink, kitchen!"
Posted by Kristopher Battles at 9/09/2013 02:50:00 PM