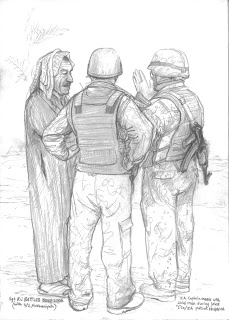 As you know, recently I went on a joint patrol with elements of Lima Company 3/2 and the Iraqi Army. During one of these patrols, Lima Company showed the IA the local area, and the IA leader took several opportunities to make his presence known among the people, and tell them of the coming transition of that area to IA control. Here is a drawing from that experience, where the IA Captain is talking with a local Iraqi man. The Iraqi people seemed to warm to the man considerably, and were pleased to hear that the Iraqi Army was taking over the area and that the Americans would be leaving. 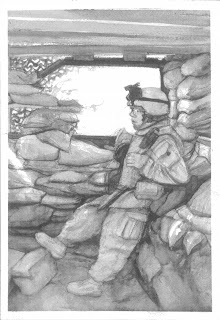 During my time with 3/2 I also got to spend considerable time at various Observation Posts (also called Patrol Bases) with Lima Company and India Company. Here is a drawing of a marine on post at OP Bears, around 24 November. It's done in pencil and graphite wash, a technique I've begun to use and have started to like. 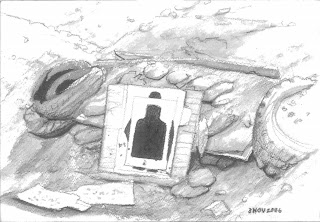 I also have another sketch in graphite wash, this one from my time in Baharia, with the 1st Battalion, 24th Marine Regiment. It's a picture of a target station at the firing range at Baharia, with some shot-up targets and old tires, and some discarded targets littering the ground. I found it an interesting "still life" and felt compelled to draw it.

It's great, getting paid to sketch and draw things that interest you-- especially in the Marine Corps!
Posted by Kristopher Battles at 12/09/2006 06:43:00 PM

Kris, thanks once again for bon travay la.

Wow I'm sooo impressed. I'm really glad I stumbled into your blog. Thanks :)

I am glad I found your blog. I am a Marine mom. My son is with the 4th CAG. I love the sketch of the men playing chess.

I'm glad you get paid to sketch what interests you, too. I like the graphite wash techinque - seems to work well. Stay safe.

Merry Christmas to you and your family!