I finally got off my duff and went to the nice folks at the Combat Camera shop here at CF and scanned in some of the drawings I'd made during and after my trips to 1/24 in Baharia and 3/2 in Habbaniyah. 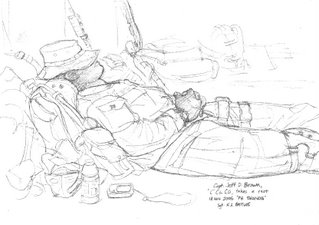 This is a sketch I did of the Lima Co. Commanding Officer, Capt Brown, as he catches some needed rest after a long previous night's activities (and before a coming patrol) 18 Nov 2006.

They were going on joint patrols with members of the Iraqi Army, in order to show them the ropes and the territory, and give them control of the area by the beginning of December (which they have successfully done, nothankyouCNN).

Here's a photo that Combat Cameraman Sgt Adaecus Brooks took of me, while I was sketching Capt Brown(!) 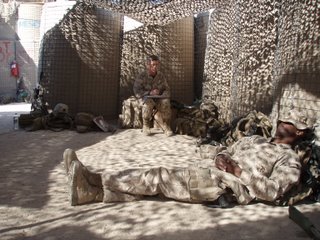 I also sketched Cpl Ryan as he took a rest nearby. (I did a quick ink-scribble of him, which has a certain whimsy, I hope): 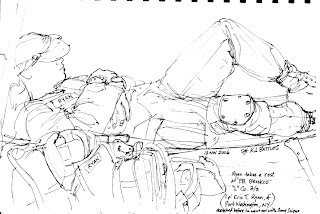 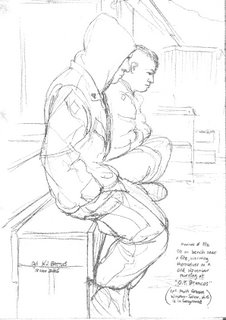 During my time with the 3rd Battalion, 2nd Marines, I also visited the marines at OP Broncos, just down the road from OP Steelers (detect a theme here for OP names?) and went out on a patrol with the IA and some SEALs (I'm working on art from photos I took of the patrol).

I got to sketch the marines as they got up and went about their morning rituals, one of which was to sit at the little fire they'd made in an empty ammo can and warm themselves:

I'll be working on a painting of another scene, of the marines around their fire, enjoying a little light reading...

I also am working on a drawing of a marine shaving at the OP's "Hygeine Pit" -- they have no real head (bathroom in Marine Corps/Navy lingo) at these OPs, so they "poo" in little green plastic bags on port-a-john seats, and pee in a pipe that empties on the outside of the camp. These may sound banal to some, but they are a part of these marines' experience here in Iraq, and are part of history.


On one patrol, I was able to sketch a marine officer call in an airstrike on a known insurgent house, which had been cleared of people and set to blow. Capt O.J. Weiss called down several 500 lb. bombs and a couple 1000 lb. bombs on the target, until the house was gone.

These are great Kris, you are very good at this,


my prayers go out to those marines, and all that are there!

Hey Kris- it's your cousin Eric (Corrie's son). I just wanted to let you know that I really admire what you're doing. I know it's not easy, and I may be young, idealistic, and naiive, but I respect the heck out of you for having the guts to be over there. You're in my prayers and thoughts constantly. Keep it up!

I was looking at blogs listed at milblogging.com, and I came across yours. I've gotta say, you've got some great sketches here.

I'm with the team at CENTCOM whose job it is to build relationships and dialogue with the blogosphere and get information from CENTCOM's AoR out to the Internet.

One of the ways we do that is facilitating interviews between bloggers and our deployed troops. Being one of three combat artists serving, I believe you would have an interesting perspective, and I'm wondering if you'd be willing to take part in any interviews that I could set up through email.

Sgt., if you're interested in doing something like this, get ahold of me at the email address below.

Thanks for your time,

Hey, now, don't go misusing the honerable name of Duff! It's a good old Scottish name. I like your artwork very much.

We send love and light all around.

We are proud of you and your work.