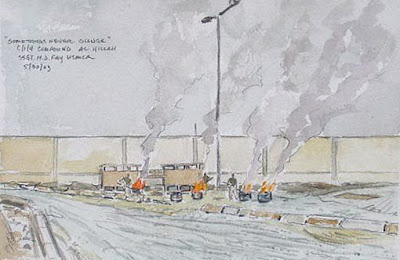 "Some Things Never Change"
This is an old adage, as well as the title of the above watercolor by Marine Combat Artist Mike Fay, depicting Marines in Iraq burning fecal matter in barrels to maintain sanitation.
(I reprised it with my own version of that theme below): 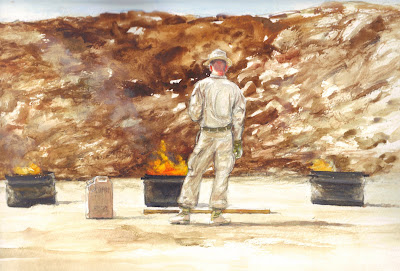 Marine burning the sh#! in barrels at Fire Base Thunder

As I travelled around the AO in Afghanistan and witnessed various methods of dealing with sanitation in a combat zone, I couldn't help but remember that, yes, some things never change.
Today's military uses Port-A-Potties quite often, and it usually doesn't take long at any FOB for permanent bathroom facilities to be brought in. But due to the expeditionary nature of the situation in Afghanistan, many locations utilized some tried and true ways of disposing of waste and filth... 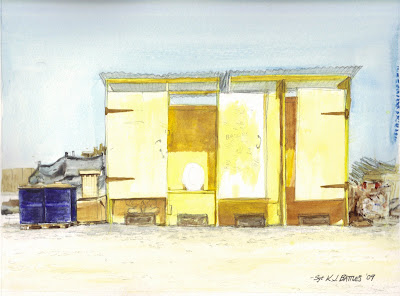 The "facilities" at FOB Delhi 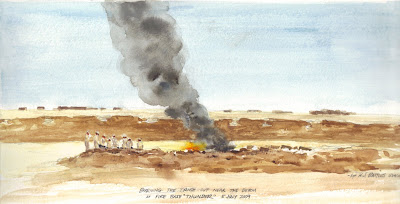 Burning the Trash near the perimeter at Fire Base Thunder

I thought it'd be good to capture in watercolor these old ways of doing things, as an historical record of the present and especially as a tie to our past. 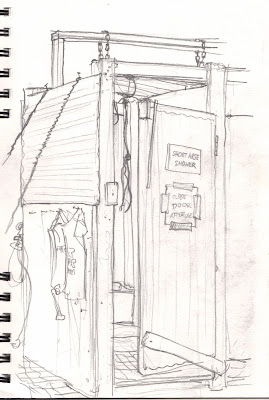 The above sketch is of a make-shift shower at FOB Delhi (where the British were for years before the Marines got there). I depicted it because of the sign on it which read, "Short Arse Shower". I guess it's for those of smaller stature...!
Posted by Kristopher Battles at 8/05/2009 11:40:00 AM

The Thunder Run has linked to this post in the blog post From the Front: 08/06/2009 News and Personal dispatches from the front and the home front.