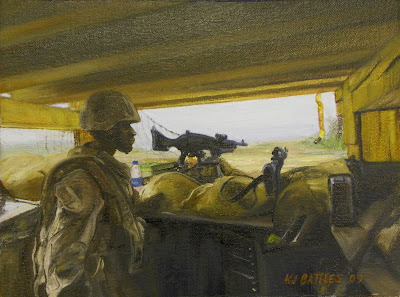 This is an oil sketch on panel, about 10" x 8", depicting a Marine standing post in Afghanistan.
Specifically, it is a Marine from H&S Battalion, 8th Marine Regiment, standing watch on Post #3 at Forward Operating Base Delhi, near Garmsir, Afghanistan, in July 2009.
It could be Anyman standing Anypost, though.
I think that when we combat artists paint things, we try to make images that not only are historic records of an event or activity, but also stand as archetypes or allegories.
The reason a painting may strike a chord is that it's somehow connected to a shared experience. Even if the subject is something commonplace, it somehow connotes or denotes something significant.
The Sentinel Standing Watch has been a significant symbol in every culture, throughout all of history. And the role of watchman has been a significant job as well.
This painting, in its Subject, is a narrative, illustration, and allegory . But in its being, Per Se, it is more. It not only depicts, but it stands in for, that which it depicts.
On one hand it reminds us of those who stand watch over us, each and every day, faithfully and thanklessly, guarding our safety and liberty.
But this little painting, in its own little way, also stands itself as a sentinel-- it calls out to us, and asks us to identify ourselves, friend or foe; and reminds us that we too must do our duty as a culture-- we must stand fast, remain vigilant, and resist the urge to fall asleep or falter when we need to persevere.
Posted by Kristopher Battles at 8/14/2009 09:32:00 PM