Swelter in Some Kind of Shelter

There were some common themes that ran throughout my deployment experience in Afghanistan, and I think anyone who's been there for any period of time can sympathize with them-- three of which are 1)Dust, 2) Heat, 3) Waiting/Passing Time. I had sketches and watercolors of each of these, and will continue to draw and paint about those things, as well as all the other things common to a combat zone.
Today's Theme: Heat (or, Swelter and Shelter)
Sleeping was very difficult in the heat, especially for someone who has a shift that requires him to sleep in the day time. And it was strange that the heat of the afternoon made you want to sleep, but rigorously denied you the ability to do so! The tents also (especially at FOB Dwyer) seemed especially designed to keep the heat in...
The tents at Delaram seemed to be melted as if in a Salvador Dali painting! 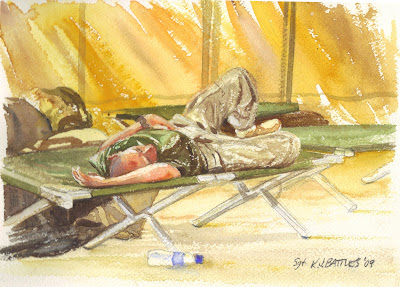 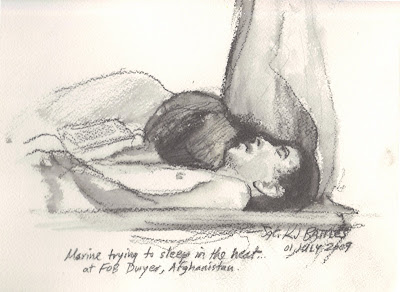 Two images of Marines trying to sleep in the heat at FOB Dwyer
During our visit to Fire Base Thunder (now known as "Fiddler's Green" after the arty legend) we slept under the stars the first night, and then were able to secure some cammie netting, which I'm sure is now being used as the "visitors tent":

Our "home SWEAT home" for our time at Fire Base Thunder

Great images, as always. I can feel the heat from here.

The Thunder Run has linked to this post in the blog post From the Front: 08/06/2009 News and Personal dispatches from the front and the home front.