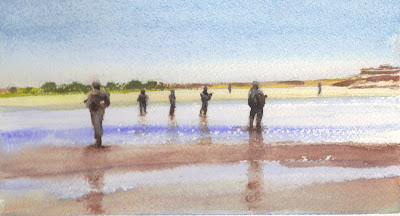 Crossing the River Near Delaram

When people ask me what it's like going on a patrol, I usually remark about the strange slowness of the movement, and the almost surreal normalcy of it all. If the weapons were absent, it'd look like a casual walk in the desert or about town (until something happens to disrupt that walk about, of course).
What a strange feeling it is, to be so exposed, and yet to move do deliberately, all the while under the potential eye of the enemy. That exposure is made more stark by the vast expanses of the open desert. The watercolor sketch above portrays the feeling of stark beauty of the desert in Afghanistan, especially when there's a river there. It also addresses the lonely nature of walking around on a patrol, even if you've got a whole squad with you. 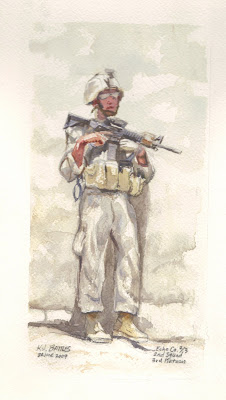 The sketch above is a watercolor I did while I was in Afghanistan, and it's of a Marine from 2/3, on a patrol near Delaram. He's against a wall, being watchful during a pause in the patrol. He doesn't seem particularly excited-- minus the weapon and gear, he could be any youth hanging out on the street.
But the calm demeanor belies the inner awareness of a person who's gotten used to this kind of casual readiness. Though relaxed, he is poised to respond should it be required of him. He can't afford to be complacent, because a firefight could come at any moment. But he can't maintain a constant state of hyper-alertness, or he'll burn out.
I'm sure someone could do a doctoral thesis on this phenomenon in human nature.
Posted by Kristopher Battles at 8/16/2009 07:31:00 PM

The Thunder Run has linked to this post in the blog post From the Front: 08/17/2009 News and Personal dispatches from the front and the home front.

Thanks for the great painting and sketches they are really great and to see in another medium what our boys are doing in the AF is great also. Be safe. I have a son in the 1/5 down in Nawa. Just last Thrusday I was Googling for pictures (which I do two or three times a day) looking for pictures of the Marines in AF. There are many photog's there and every day there are new pictures. Anyway, low and behold I was reviewing some video and there was my son. They were on a partol and he was at first walking away from the camer. He then stopped and turned back toward other Marines and the camera man stayed on him for 30 some seconds. It was great to see him, he looked in good health at that moment. Since we had not heard from him in over a month it was real nice to see him.

Anyway, thanks for your great Art, I check several times a week to see what is up.

Thanks for your kind words!

It's so great to hear when people like my stuff, and it's a great privilege to be able to mean something to those who have a stake in all of this.

Godspeed to your son.

Hey this painting is of me. I remember when u took that picture. It was at a small compound in the middle of nowhere. It was when u stayed at the ANP station with us. my names Michael Duchini. I was wondering how I could get a copy of that to give to my father if possible?